The Fox News Parody Site that Digg Doesn't Like - At All 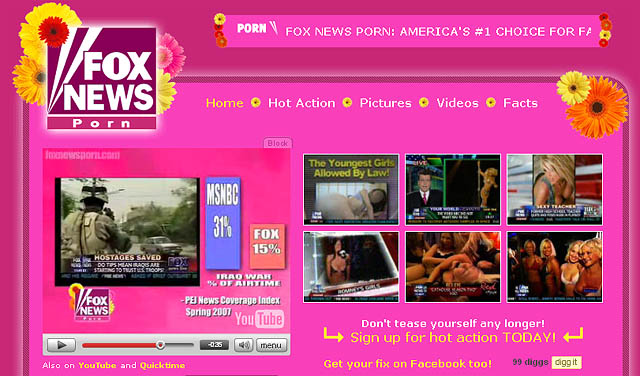 If there's one site that LAist loves loves loves it's Digg. The power of The Hive has been manifested beautifully in sites like Metafilter and Fark and SlashDot but never with as much Web 2.0 power-to-the-people panache as Kevin Rose's much heralded uber-site.

Likewise if theres one production company LAist loves it's Robert Greenwald's Brave New Films. These are the Los Angelenos who have made hard-hitting low-budget left-leaning hit pieces on Wal*Mart, The Bush Administration, and Fox News.

If you enjoyed Brave New Films' "Outfoxed", a doc that sold over 200,000 dvds, you will probably love their new project, a parody site of sorts called FoxNewsPorn which hit Digg's front page today and is close to reaching the top of Reddit - Digg's most worthy competitor.

Only problem is, Digg, perhaps because of their ongoing talks with Fox to be business partners, not only deleted the primo frontpage post that would have led tens of thousands of Digg readers to FoxNewsPorn, but they banned Brave New Films for posting it. 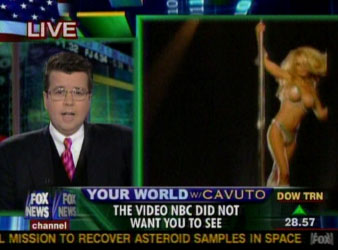 Here is how Brave New Films explains their email exchanges with Digg:

Yes, that submission was Adult content. Yes, it was against our TOS, even though it was broadcast on FOX. Unfortunately the domain will not be unbanned. As stated before, if you agree not to submit anything that breaches our TOS, we will reinstate your account.

Of all people, the youngins who run Digg know that you can't stop the signal, and now there are other Digg posts defending the right of FoxNewsPorn to get its moment in the virtual Digg Sun. In fact a few of the highly-rated posts (and subsequent comment threads) denouncing Digg, it's ever-growing relationship with the Murdoch empire, and the inevitable decline of the once flawless D-I double G.

And if life was fair, those posts would make the front page too. But alas, life is only fair if you're a billionaire Aussie with an agenda.

This just in - the story about Digg banning the FoxNewsPorn site is now #1 on Reddit.

The signal, especially if it's a colorful (and semi-sexy) Ha-Ha at Fox, can't be stopped.

Congrats Brave New Films. It looks like you have another hit on your hands. Getting banned by Digg which leads to being #1 and #4 on Reddit is quite a twist on the Digg Effect - and another victory for competition - and true Web 2.0 standards.