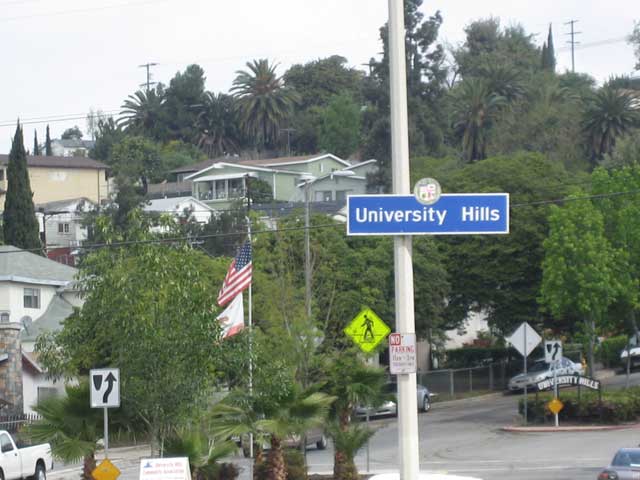 It would only make sense that our elected City Councilmembers know, right? After all, the fifteen of them represent, in some way or fashion, all of the official neighborhoods that that they and previous City Councils proposed and approved.

In late October, we asked every Councilmember to provide a list of the official neighborhoods in their district and a map that could easily identify them. Simple enough, right?

Nine of the fifteen Councilmembers and their staff did not respond. Most surprising of those nine was Eric Garcetti, who himself is a Los Angeles history aficionado. The other eight include Ed Reyes, Jack Weiss, Richard Alarcon, Bernard Parks, Herb Wesson, Bill Rosendahl, Jose Huizar and Janice Hahn. This question must lead to top secret information, or it that something that should be so simple is really not at all.

That leaves six Councilmembers who responded. But this doesn't mean they had answers. The best example of "we really don't care about our little blue signs about your neighborhood" came from Valley representative in Council District 12 Greig Smith. His spokesman told us this:

I'm sorry, we can't provide that to you, we just don't have it. We would have to pull it from the Planning Department and draw out the map ourselves, or have them draw it out for us. You need to request that directly from planning department. Thanks.

Apparently, Greig Smith doesn't know that he represents Chatsworth and Granada Hills. Northridge, what's that? Smith is a good Councilman, a really good one in fact. But this is really embarrassing.

A staff member from Downtown Councilwoman Jan Perry's office did respond, but after a confusing e-mail exchange, it was duly noted that the e-mail was accidentally sent to LAist, but meant for the Perry herself. However, the mistaken e-mail we received gave us some insight:

It's not a bad idea. [LAist thanks Perry's office for the props]

However, I have a fairly comprehensive map of South Los Angeles that I drew at your request 3 years ago, but you never saw. I wouldn't want it published unless you saw it and we disucussed [sic] it.

We never heard back, therefore, never received even a list of official neighborhoods in Perry's 9th District.

Tom LaBonge's office was the first to excitedly respond, within 24 hours no doubt. The request from LAist was forwarded to all the council field deputies, who represent the elected official in assigned areas and neighborhoods. Unfortunately, that first response was the only response. So major kudos are given to the Wilshire Field Deputy, Carolyn Ramsay who seems to be the only one on top of things. She represents Hancock Park Windsor Sqaure, Brookside, Miracle Mile, and portions of Hollywood and was able to provide boundaries for each.

Tony Cardenas' office provided a map, although it was an outline of his district with a zip code overlay. Valiant effort though.

In the end, it was Dennis Zine (map below) and Wendy Greuel (link to .pdf map), who both represent portions of Valley, that provided the most succinct and clear answers to our questions. Their staff provided easy to read maps of the Council Districts and their communities.

The only disappointing and lame aspect of Zine's map (pictured above), which was made by the Department of Public Works (DPW), was a small note below the key:

NOTE: The Community boundary depicted is for historical reference only, and is not approved by the City of Los Angeles.

Shouldn't DPW be spending time creating maps with the approved boundaries rather than ones for "historical reference"? Don't get us wrong, history is important, but they are people most likely to have the best access to all those official declarations of communities. And the provided map looks pretty damn accurate anyway, except for that fact that Warner Center is not an official neighborhood.

Nevertheless, showing off an even deeper knowledge of Zine's district, staff member Jessica Tarman went as far as asking if we were interested in including unofficial sub-communties such as Melody Acres and Walnut Acres. Major props to her for being that nerdy.

Will we ever get a final answer and complete picture on what neighborhoods are exactly where? Probably not anytime soon. While some neighborhoods are pretty well defined, many are not. Some neighborhoods don't even have those official blue signs (can anyone find us a North Hollywood one? Caltrans signs don't count). And if you think the city is going to put much money into a project such as this, think again. It's just robbing Peter to pay Paul with the current budget situation.

If this were to actually happen, what needs to be done is an extensive council record search finding all the motions that made these neighborhoods. We're sure some hot shot intern could even do that. And if they find that some of these communities are bogus and have no record, just blame the realtors.

Top Photo of University Hills by Waltarrrrr via Flickr. Photo of Marina Peninsula by Zach Behrens/LAist. Map of provided by CD3