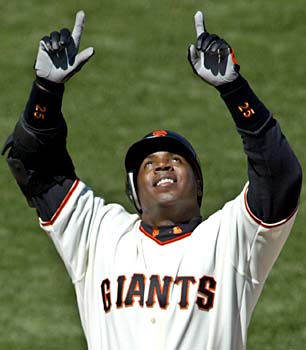 The other shoe has dropped in the Barry Bonds steroid scandal as today federal prosecutors formerly accused the former Giant of obstructing justice and lying under oath.

"I'm surprised," John Burris, one of Bonds' attorneys, told the AP, "but there's been an effort to get Barry for a long time. "I'm curious what evidence they have now they didn't have before."

Even the president of the United States chimed in - thru a proxy.

Tony Fratto the White House spokesperson said, "The President is very disappointed to hear this. As this case is now in the criminal justice system, we will refrain from any further specific comments about it. But clearly this is a sad day for baseball."

But it's an excellent day for SF Chron writers Mark Fainaru-Wada and Lance Williams whose book Game of Shadows blew the lid off the case and was clearly right on the money.

However this was a situation where very few people believed that Bonds wasn't lying about juicing. In fact any time Jose Canseco is the only guy who can be trusted, you know it's a situation that wont end well.

Bonds will probably have his day in court sometime near Opening Day of '08, which works out because even though he hasn't officially retired from baseball, he has no contract with any MLB team.