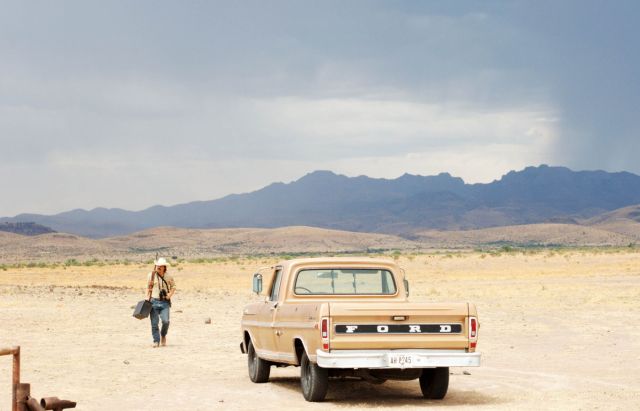 No Country for Old Men is so profoundly good, so rich in depth and meticulous in craft that if someone were to ask me what I thought of it, I would only be able to stammer, "Just...go see it. Quickly!" Adapted from the Cormac McCarthy novel of the same name (its title lifted from Yeats' Sailing to Byzantium), No Country for Old Men tells the deceptively simple story of a man who finds a bag of money in the brush and the hell that his discovery unleashes upon him. It is also, undeniably, a meditation on all the loss that comes with age.

Josh Brolin is Llewelyn Moss, the man who finds the illicit cash after stumbling upon a drug deal gone bad. Moss knows that taking it is a bad idea—he even says so aloud—but he just can't resist the temptation of all that money. Even when he realizes that he's being hunted by the terrifying Anton Chigurh (Javier Bardem) and that his wife is in imminent danger, Moss persists in his quest to keep it. Brolin's subtle performance is remarkable in the way he is able to create a character that is equal parts daring, foolish, greedy and sympathetic. 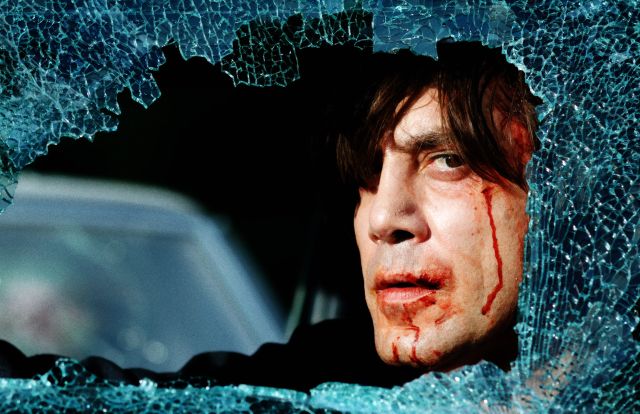 Ordinarily, a turn as inspired and focused as Brolin's would be the obvious standout in a film. As Chigurh, however, it is Bardem who dominates No Country for Old Men. His quiet, savage performance recalls another memorable line by Yeats, "...a gaze blank and pitiless as the sun." The innocent perish in his wake as surely as the guilty. That a character so monstrous never once devolves into a caricature is a supreme testament to Bardem's work. Trust me, you'll never look at a coin flip or a pressurized gas tank in the same way again.

What's so amazing about No Country for Old Men is that I'm several paragraphs into this review and I haven't yet mentioned the sterling performance given by Tommy Lee Jones! His Sheriff Bell--a craggy mixture of wit, fear and despair--holds the narrative together as he comments on the events of the story even while standing outside of them. It's extraordinary that a character who is essentially passive can be so indelibly etched and relevant. Though appearing only briefly, Woody Harrelson and Kelly Macdonald also shine--everybody shines.

Ultimately, all of this traces back to Joel and Ethan Coen. I share the belief that they've been in a bit of a creative lull over the past few years. With this film, that lull has officially ended. It's odd (but somewhat fitting) that such florid writers as the Coens would find harmony with the spare, elegant prose of Cormac McCarthy and the rough environs of West Texas. As always, frequent collaborators Roger Deakins and Carter Burwell deliver superb work. There's nothing else to say except No Country for Old Men is the best movie so far this year.