You Mean We're Not Jackie Johnson's Only Fans?

by Tony Pierce in Arts & EntertainmentMiscellaneousNews on November 13, 2007 12:00 AM
Tweet 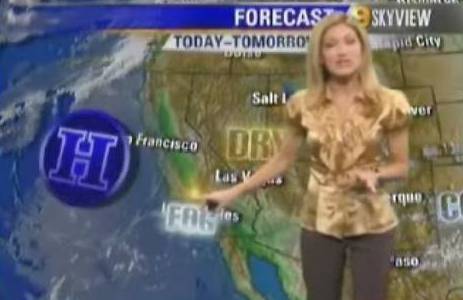 LA has always been a stronghold for weathermen.

We've had Fritz, Dallas Raines, Johnny Mountain, Christopher Nance... even Garth Kemp has made a dent out here. Did we miss any?

But lately we've noticed that there have been a few weather-women who have brought pleasant little smiles to our faces as they find new ways to tell us it's going to be sunny and mild here in LA.

On the top of the list is KCAL's Jackie Johnson who appears to be dressed by someone who is constantly trying to hide the fact that she was born with a rack that won't be denied.

Local blog Soup Cans has noticed the fashion choices that KCAL has chosen to bestow upon Johnson and we look forward for more updates to see if a trend develops.

Did Fritz ever say it would be like this?