Austinist attended a town hall meeting about proposed noise ordinances that could undermine the city's future as the Live Music Capital of the World, and lamented the possible loss of Texas's only feminist bookstore. Throughout the week, they interviewed a bunch of indie fashion designers and D-I-Y websites—Etsy, Ornamental Things, 31 Corn Lane, and Aorta Designs—for the upcoming Stitch Fashion Show. They also did some extensive coverage of last weekend's Fun Fun Fun Fest, which featured over 80 indie rock/electronic/punk bands like Girl Talk and Battles—there's also a video recap of the festival, viewable in HD.

After initial reports of a container ship ramming into the Bay Bridge without much fuss, SFist saw the South Korean Cosco Busan spill

over 58,000 gallons of oil into the San Francisco Bay, causing widespread devastation to wildlife. Ick. Moving on from ecological crises and onto to existential ones, they also witnessed a UC Hastings law student's suicide attempt successfully thwarted. Top Yahoo executives apologized to the mother of a Chinese journalist that they helped imprison for pro-democracy effots. And does an abnormal amount of falafel purchasing lead to a trail of terrorist activities? At one point, the FBI sure thought so. Oh, and much to no one's surprise whatsoever, Mayor Gavin Newsom won four more years after last Tuesday's election. Ta-da.

Torontoist ended the week right, with an interview with Our Lady Peace's Raine Maida. They also featured a gorgeous VR panorama of the Four Seasons Centre, the city's beautiful new(ish) opera house; surveyed an old strip club ad; and dashed the hopes of Canadian Apple fans, who've been waiting for an iPhone for, like, ever. Oh, and their city totally set a record for the world's largest stocking. 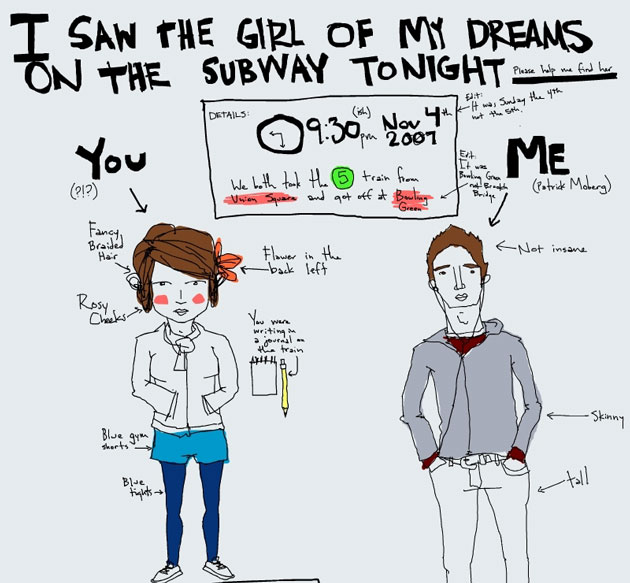 New York City was at its strangest and swellest this week. On Sunday, tens of thousands people ran in the NYC Marathon, including Mrs. Tom Cruise, aka Katie Holmes, who ran it in just under 5 hours, 30 minutes. Gothamist also found out that limes in Corona are sometimes illegal, the weird maple syrup might be back and a famous punk music pioneer-turned-real estate broker was possibly killed by her much-abused assistant. The Big Apple blog spoke to Debbie Harry before her concert as well as SNL star and head writer Seth Meyers while on the WGA strike picket line. But the big awwww-inducing story might be the one of the Subway Cyrano, who spotted a girl on the subway, created a website, found her, and told the story to Diane Sawyer.

This big news this week for DCist was the largest public corruption scandal in city history, with two Office of Tax and Revenue employees indicted on charges of embezzling more than $20 million. They also had photos of a big coal train derailment over the Anacostia river, debated the merits of turning driver's licenses into Metro fare cards, and got the goods on what celebrity chef Anthony Bourdain thinks of D.C. dining. And of course, the Redskins' Clinton Portis' crazy press conference characters are back.

LAist is all over the Hollywood writer's strike with daily coverage. One of the best explanations of why all this is happening 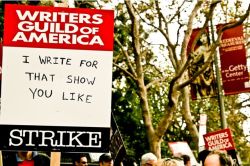 comes from NBC's The Office. In other Hollywood fun, TMZ went real-time reality with the internet when they released their "spy" cameras at Urth Cafe hoping to catch some stars, all sponsored by AT&T. Nothing comes cheap in Los Angeles either: Whole Foods is getting fancier and fancier while one new exclusive club in the reviving Downtown neighborhood is charging members $4,950 to gain access (Red Bull not included). In news you didn't hear, 200 people watched a woman drive her car into a crowd, hit a pregnant woman, drag her down the street, and then backup and reverse the car over her fallen body again. They watched and did nothing. The media did the same. Eeek! Lastly, interviews this week included Loudon Wainwright III and Taylor Hanson of Hanson.

This week Phillyist rocked it like a wizard, took a tour of the local (and not so local) food blogs, enjoyed some simulated Eagles victory after staying up late watching them lose, and tried to train the humans to behave properly at the dog park.

Bostonist has been busy celebrating Movember, or Mustache Month. However, they're still trying to get over the mind-boggling revelation that a local priest allegedly stalked Conan O'Brien. Conan O'Brien doesn't even have a mustache! Meanwhile, Bostonist witnessed some election shenanigans, MIT got pissed off at Frank Gehry over Gehry's funky Stata Center, Ghidorah has been kicking everyone's ass, Manny Ramirez is selling more stuff on eBay, and one of the Aqua Teen guys is back in the news--and it has nothing to do with getting arrested. And an important message: Tyra Banks, be careful if you visit Boston. An entire burlesque troupe is unhappy with you.

But wait... that's not all! Check out this week's favorites on Chicagoist, Houstonist, Sampaist, Seattlest, and Shanghaiist.