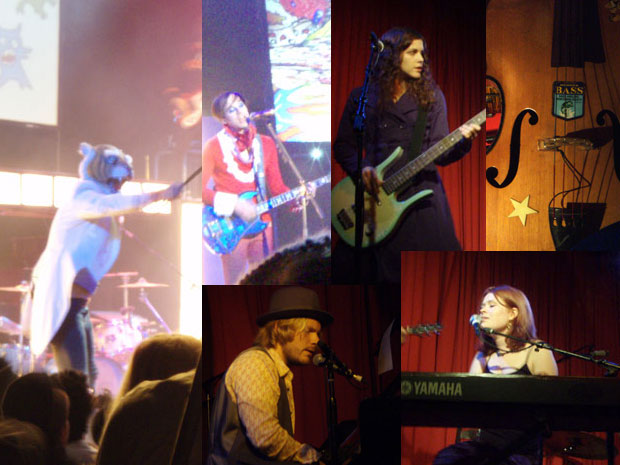 Thursday night was a busy one and I probably could've used more of a decompression stop between the Hotel Cafe and the Avalon to give my brain ample time to switch genres, but it was enjoyable nonetheless. It all began at 7 p.m. at the Hotel Cafe with Amy LaVere. I immediately knew I liked her when she took the stage with an upright bass that had a Bass (fish) sticker in the middle of it. It was cheeky, and I suppose that’s one way you can refer to LaVere. She took the stage wearing a trench coat and high heels, and throughout the set alternated between the upright bass and an electric one.

Some of my favorite new artists leave me befuddled when I try to think up a point of reference to describe their sound. The things that popped into my head while listening to LaVere were along the lines of “Madeleine Peyroux mixed with some Lily Allen?” Or “Jenny Lewis meets Jesca Hoop?”

LaVere’s music deftly navigated genres, though not in a jarring sense. And her song introductions were quite amusing. At one point she explained that she was inspired to pen a tune after hearing a woman on the news (who was being led away in handcuffs) utter the words “Killing him didn’t make the love go away!”

It was a great start to the evening, and it was nice to see Alison Arngrim (Nellie Oleson from Little House on the Prairie) grooving to LaVere’s music with the rest of us. 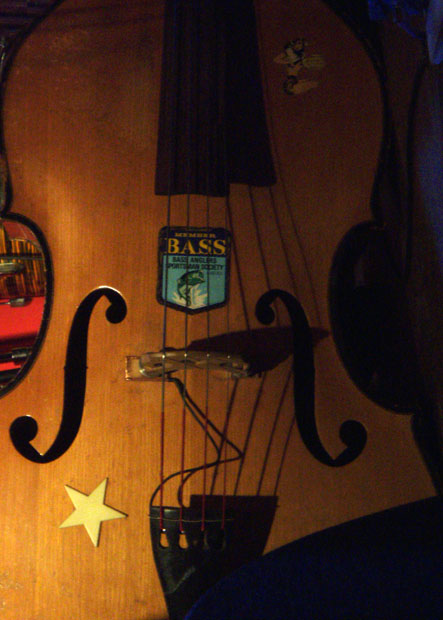 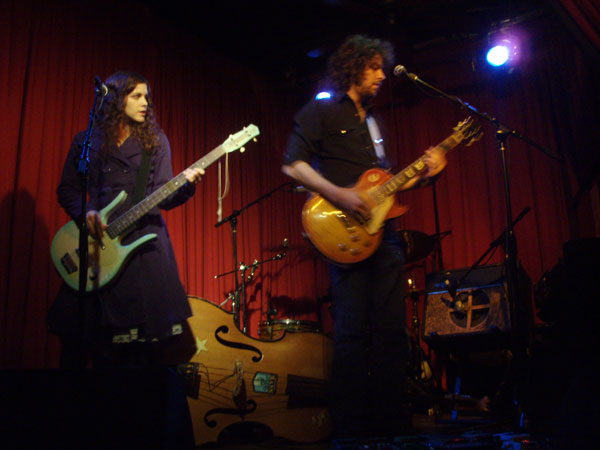 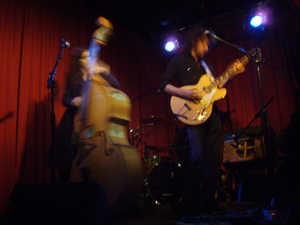 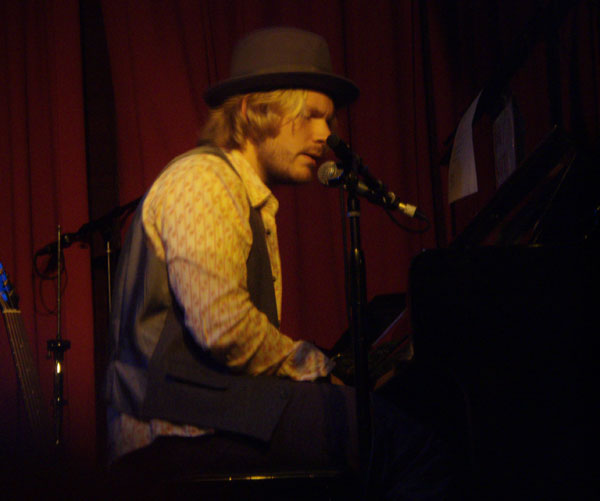 Next up was Bryan Master, who, according to a flyer left on our table was hailed by Music Connection Magazine as one whose vocal stylings were akin to that of Elliott Smith and Michael Stipe. Those are big shoes to fill, but I must admit Master does have a strong, clear voice and at times I could definitely hear shades of both artists. If I had to make a comparison, I’d probably go with Kevin Griffin, the lead singer of Better Than Ezra.

Master’s set went by too quickly and included original material along with a beautiful Lou Reed cover. My favorite parts of his performance were the moments when he incorporated looping into his music—even going so far as to record the last part of one song and then use the same guitar loop for a completely different song as he took over on the piano. Although Jon Brion is my favorite performer to watch when it comes to this technique, Master incorporated it so well into what he was doing that it took the listener a moment to realize he was even looping. 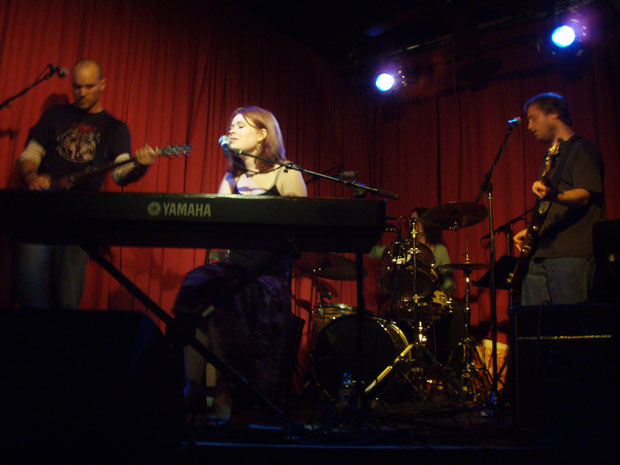 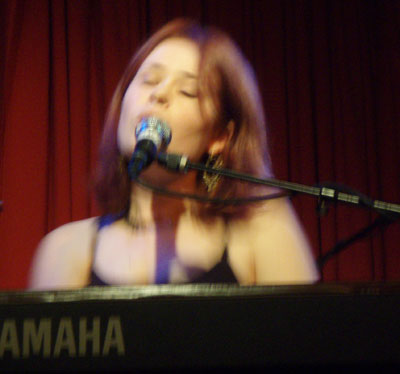 Libbie Schrader was up next, and she’s a singer I’ve kept my eye on ever since she and her old band, Think of England, toured with Poe during the Pantene Pro-Voice tour back in 2001. Although her music has been featured on a number of TV shows, to me she’s still one of LA’s best-kept secrets. I appreciate the honesty of her music and her take on life as a single gal in this city.

This particular performance was her official CD release party, and everyone who paid the $12 cover received her new eponymous disc. The CD includes both new and old material and is the perfect introduction to Schrader’s music for new fans.

Her set list followed the song order of the album and although she played a number of my old favorites, such as “War on Science,” “It Breaks Today” and “Come When I Call,” I fell in love with one of her new ones called “Wish You Were the Woman.” During the song, she laments “It’s no good being a woman when you’re wanting to pursue” and continues with “I wish you were the woman / I wish I was the man / When a man loves a woman like I love you / He’ll get her in the end...”

The most poignant moment of the evening came during her final song, “Alive,” which is a beautiful piece about 9/11 that is still just as relevant today.

After Schrader’s set ended, I switched gears completely and hustled over to the Avalon, where Of Montreal was just about to take the stage. For those who haven’t seen them perform before, it’s quite a show. 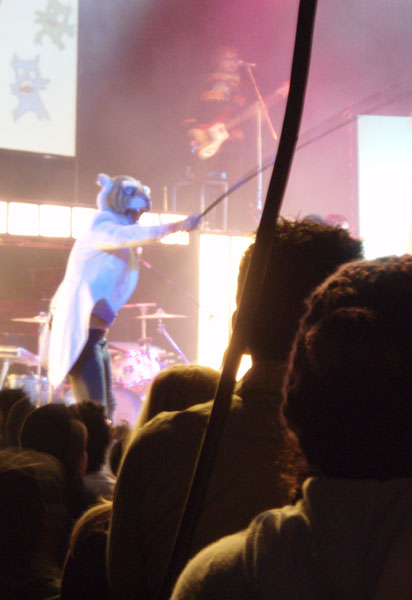 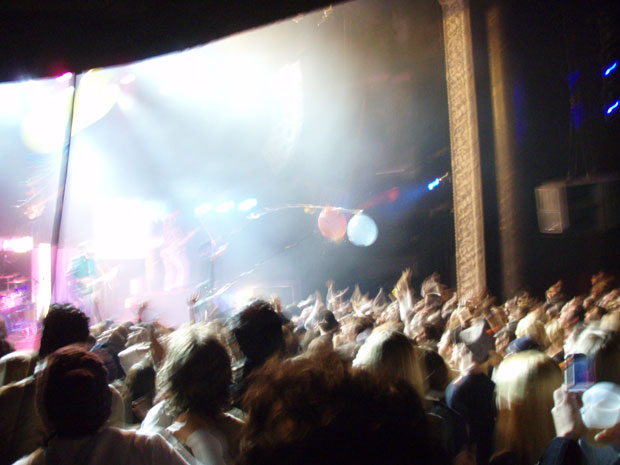 Throughout the entire set, images on screens around the stage projected odd images similar to those in Of Montreal’s animated music videos, depicting people and animals moving slowly as if their arms and legs were on hinges. And you never know what will pop out on stage, such as strange creatures and animals who do battle with band members and each other.

Of course, the epicenter of the entertainment is lead singer Kevin Barnes himself. I daresay he has more costume changes during a concert than any other male performer out there. In previous concerts, his ensembles have ranged from samurai garb to something that looks like it could be out of The Rocky Horror Picture Show. During Thursday’s show he went in more of a couture direction with accessories constantly changing (my favorite was his white straw hat).

It’s amazing Barnes can belt out his perfect falsetto in spite of all his maneuverings, but his vocals didn’t miss a note. It proved that even though the stage show is stimulating, the music is even better. Although the greatest number of songs were from their most recent album, Hissing Fauna, Are You the Destroyer? it also included a good mix of their previous material (such as one of my favorites, “Oslo in the Summertime”) along with a taste of some new stuff.

During the concert, audience members were notified of the fact that they were being recorded, and cameras all around the venue confirmed this fact. Although I’m not sure exactly what they’ll do with it, I’m guessing a live concert DVD will come of it.

Of Montreal will take the stage at the Avalon again tonight. 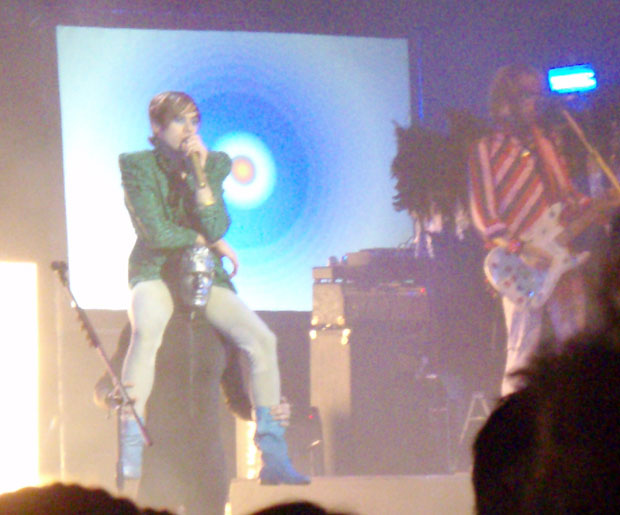 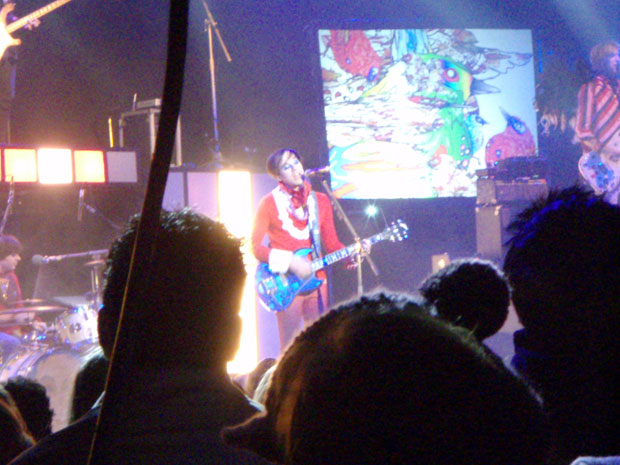 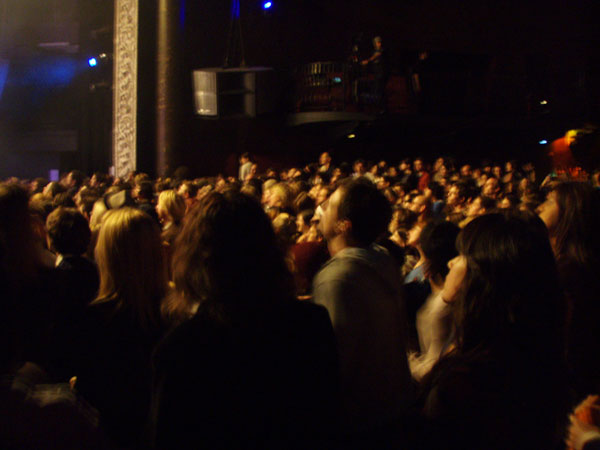