Inside LA's Most Exclusive Bar's Application 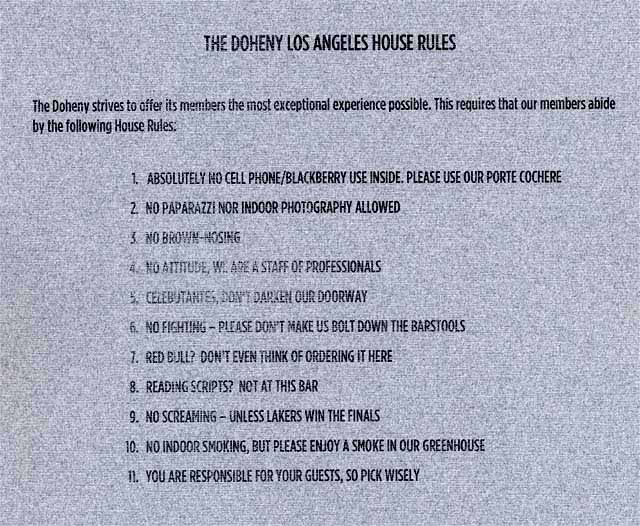 Adding a little thrill to the evening, last night 213 Inc's president Cedd Moses and Seven Grand GM Aidan Demarest passed out a short stack of application packets to interested scotch-tasters at Seven Grand. The gentleman introduced the hush-hush new lounge, The Doheny as an exclusive club for the downtown crowd, with added benefits of concierge service from Preferred Group.

How tight is secrecy about the Doheny? Recently Citysearch described it thusly:, "Downtown club king Cedd Moses' new lounge is so exclusive he won't even reveal the address." Although neither Moses or Demarest mentioned the exact address, the cost of membership was finally announced, as were the hilarious House Rules, and how much you should be earning if you wanna be taken seriously.

All of that and more from the application after the jump. 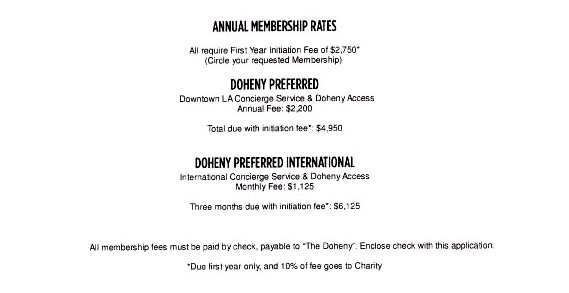 The Doheny is poised to be downtown LA's most exclusive, new, luxury bar for those who want to have a fancy drink and a cigar after a Laker game or a night at the Nokia. Anyone can woo their clients or would-be clients with skybox seats, but where do you go afterwards to close the deal? If you're lucky, The Doheny.

Moses and Demarest said something about their possibly being only 200 members, but that number seems pretty low, as did the rates for membership. $4,950? That's it? Shouldn't memberships hurt a little when you have to sign the check? 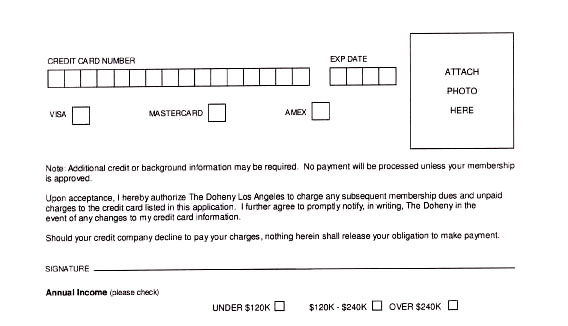 OK putting our picture next to our credit card number - that will hurt. You got us.

Actually, we sorta like that. And the idea of a "greenhouse", but this is the first time we can recall ever seeing Red Bull dissed as if it was Tara Reid. Interesting.

Benefits? Other than a place to stroll to after booing Kobe, how about "Reciprocal usage at other Doheny club locations slated for Las Vegas and a second location in Los Angeles."