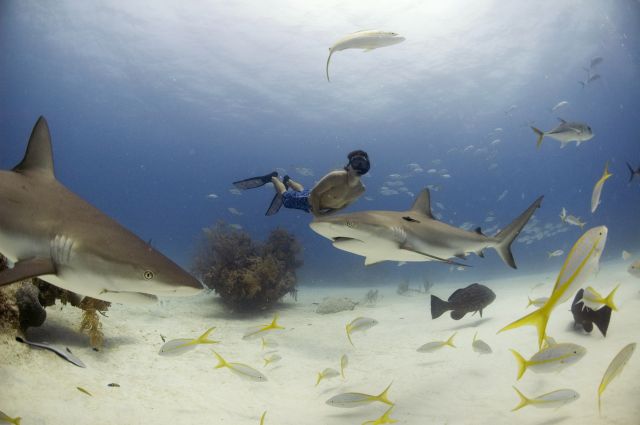 The opening moments of Sharkwater promise what appear to be little more than a beautiful film about the kingdoms of the deep. Plants sway with the current, silver schools of fish move as one and sharks glide effortlessly through the clear water, remote and menacing. Then, one of the more remarkable images I've ever seen suddenly appears: a man is standing on the ocean floor cradling a six-foot shark in his arms and stroking its side with his bare hand. Both the man and the shark seem completely relaxed.

That man's name is Rob Stewart, the writer, director, star—no—driving force behind this wonderful documentary. Rare is the film that completely alters your perception of something you thought you knew well. Sharkwater is just such a film. To those of the Jaws generation, it seems impossible to feel anything but fear and hatred for sharks. Once Stewart's film concluded, however, I felt a profound compassion for them and a deep shame for how savagely they continue to be treated by man. 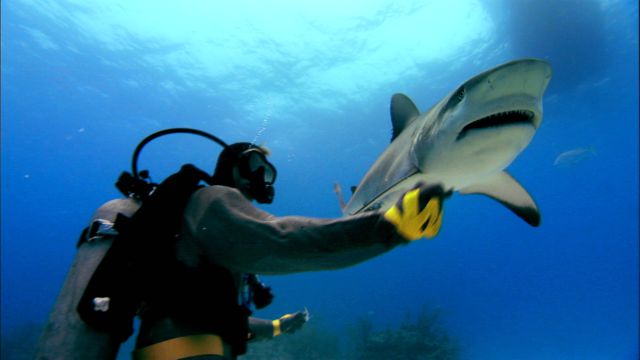 The primary source of that mistreatment today is the practice of shark-finning. Essentially, sharks are caught in miles-long fishing lines, brought aboard a vessel to have their fins cut off and then thrown back into the ocean. The fins, considered a delicacy in parts of China, are packed and shipped there to be made into soup and supplements. When one realizes that the health benefits of shark fins are entirely apocryphal and likely non-existent, one shudders at the huge scale of pointless brutality.

Stewart documents the trade that begins in South America and leads all the way to Taiwan. Along the way, he encounters boat collisions on the high seas, arrest in Costa Rica, a life-threatening staph infection and even has machine-gun fire directed his way by the Costa Rican Coast Guard as he and his fellow environmentalists speed towards international waters and safety. It is a riveting journey so preposterous that it could only work as a documentary. You wouldn't believe it in an ordinary movie.

Coupled with this drama, though, is some of the more spectacular underwater footage ever captured, particularly a sequence involving hammerhead sharks in the Galapegos. Stewart--who doesn't believe sharks are to be feared in the least--swims among them constantly, always in a state of complete vulnerability. The effect is often magical and Sharkwater is one of those movies that really has to be seen to be believed. I encourage everyone to do exactly that this weekend.

Sharkwater opens on 11/2 in Los Angeles