© Murakami Exhibit at the MOCA 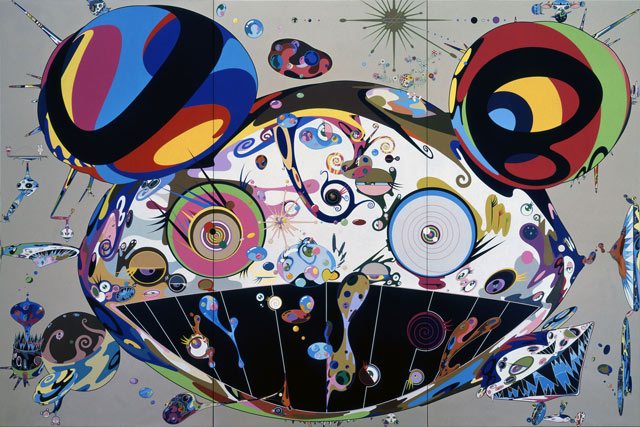 Starting tomorrow, one of Japan's biggest artists, Takashi Murakami, is having a gigantic exhibit opening up at the MOCA called © Murakami. Takashi Murakami has been called the 'Andy Warhol of Japan' for his use of appropriating pop culture, in his case, Japanese anime and manga, and then tweaking and turning these mainstream concepts into fine art. Most people know Takashi Murakami through his collaborations with Louis Vuitton and Marc Jacobs. He helped create Louis Vuitton's multi-colored monogram design, as well as inspiring the "cherry blossom" logo, tiny yellow smiley faces with flower petals around them. His work is some of the most collected in the world, fetching prices into the millions.

The exhibit itself occupies over 35,000 sq. ft., and features over 90 works ranging from painting to sculpture, installation and film, and will be installed in five different sections. The largest section will hold his paintings and sculptures in chronological order, in 10 white rooms in MOCA's warehouse. There will also be a section featuring anew animated film by Murakami titled 'kaikai & kiki', who go on a mission to investigate an underground power source inside a world controlled by artificial intelligence.

There will also be a fully operational Louis Vuitton store as a part of the exhibit. Louis Vuitton has never done anything like this before, which I think shows just how important and well regarded Murakami really has become. The 1,000 sq. ft. store was completely constructed by Louis Vuitton, and will feature brand new products specifically for the exhibit.

I really think this exhibit would be great for anyone, regardless of age or economic standing. The exhibit opens and Monday, and runs until February 11th, 2008. That gives everyone a whole lot of time to see it once, if not multiple times.