Ann Coulter: 'I Don't Want to Try to Understand'

Ann Coulter is not a tasteless, trouble-making, uninformed, clueless bimbo, though she often plays one on TV.

At least that's what we were led to believe during a nearly ten minute, extended Wikipedia-style introduction of the lawyer-turned-talking head at USC's Annenberg Auditorium.

"I've never seen such a friendly crowd at a college campus," Coulter beamed as the standing-room audience of about 250 settled down after the majority greeted her with a standing ovation.

Coulter was invited by the USC College Republicans to speak for Islamo-Fascism Awareness Week but all she really seemed interested in was selling her latest book, which apparently conflates defeating terrorists with taking out "liberals."

Coulter's 45-minute presentation elicited many laughs, loud cheers and roars of approval, although plenty of her statements made little sense no matter their relation to fact. The only subdued groan from the middle of the room came when Coulter stated: "If the terrorists were to take [Nancy Pelosi] hostage they wouldn't even have to blindfold her."

Coulter finds it ludicrous that "liberals" are so adamant about capturing Osama bin Laden. "Arresting Osama is like saying if we put Kenny Rogers in jail, country music would end." 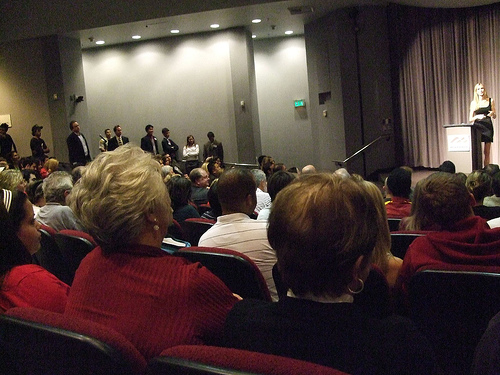 Terrorism is everywhere, and, the terrorists -- not unlike these "liberals," according to Coulter -- want to do nothing but kill Americans and their training ground is Iraq. To say that Iraq didn't attack America on 9/11 is to surrender to the terrorists, she added. 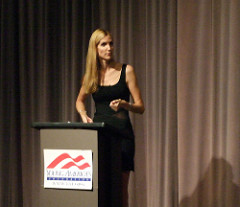 Her presentation was so disconnected and wrought with contradictions and fabrications attributed to imagined sources such as "Czech intelligence," with deliberately rhythmic punchlines, it seemed only natural for the rational part of one's brain to shut down and giggle along.

Perhaps most disturbing was Coulter's predilection for name-calling and self-serving statements which obfuscated any sense of humanity -- our troops in Iraq are mentioned only by number, as if they are merely expendable devices to protect the homeland and secure "victory." Casualties are going down, she said, adding that at this rate, "only 6,000" American soldiers will have to die in Iraq to assure us of 10 full years without "another 9/11."

Speaking unchallenged, for an adoring crowd, Coulter came off as a quick-witted humorist with a simple, albeit delusional black&white view of the world. Nobody dared step up to the mike during the 30 minute Q&A without prefacing their question with: "My name's Mark and I am a very proud conservative..."

Equally uninspiring were the protesters who gathered outside the north entrance of the Annenberg School during Coulter's two hour stint. While signs protesting the war and many of Coulter's more controversial statements are a welcome sight, the effort put forth to protest Coulter plays into her schtick. Event the public safety officers monitoring the protesters were busting up laughing. 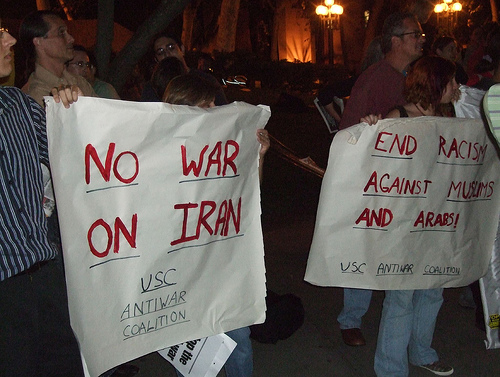 As the ethos of the so-called Conservative Right and that of a black-and-white, two party political system wears thin and Coulter's adoring minions have their final last laugh, perhaps they'll come to see the Coulter charade (not unlike much of the programming on Fox News) as little more than a crude joke -- the kind of entertainment that amounts to constantly deriding and bullying the smart kids in class.

Photos and video by Andy Sternberg for LAist.