And on the 4th Day Bush Flies to Southern California, Hugs White People, Leaves After 4 Hours 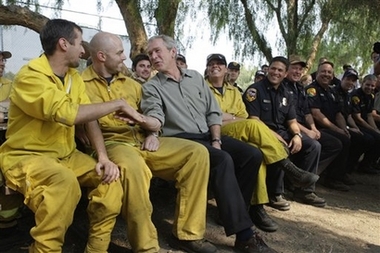 You'd think that two years after the slow-as-molasses response that President Bush was justly criticized for in the wake of Katrina, that he would have learned from his mistakes and treated the most recent California fires the way a leader should: quickly, decisively, and compassionately.

Instead, he flew out to Cali on the fourth day of the fires (progress from the five days that it took him to set foot in the Gulf Coast in 2005), viewed some of the damage in San Diego County, hugged some Caucasians, shook hands with a few firefighters for a photo op, and then flew his ass back to DC.

But not before he had the gall to tell people to call FEMA - as if a) they didn't know that after four days b) think that FEMA is gonna do a heck of a job for them or c) hearing the words FEMA coming out of President Bush's mouth in 2007 isn't ironic and cringeworthy.

Now people here in this part of the world are wondering, is there a number they can call to get help? And here's the number: 1-800-621-FEMA. You want to find out whether or not you qualify for help, federal help, just call 1-800-621-FEMA or go to the website FEMA.gov. And there's a third way that you can find out whether you get help, and that is through a mobile disaster recovery center that FEMA's deployed around this state. And Arnold Schwarzenegger's right. These fires are going to go out because of the bravery of the people behind us. But there's still going to be needs and concerns. WhiteHouse.gov

Meanwhile the LA Times are doubting that a million people were actually evacuated and an Op-Ed written by an LAT columnist recommends treating the Prez and VP as though they were psychos.

update: Bush with some non-whites omg. we sit corrected.