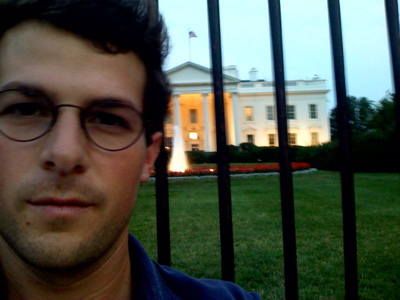 LAist had the opportunity to catch up with Jacob Soboroff, Executive Director of Why Tuesday to talk about WT, their upcoming projects and politics. Jacob has worked as a part time advance man for NYC Michael Bloomberg and briefly played the same role for presidential candidate Howard Dean. He moved back from NYC to his hometown of Los Angeles last year, when I first met him, and since returning has video blogged for LA Observed and also just recently became a contributor to the new PBS series WIRED SCIENCE through KCET Los Angeles. Here's what Jacob had to say on all of the topics above and few others.

Well, hang on. Our group isn't just about voting on Tuesday. It's about making America's democracy stronger through increased voter participation. The USA actually ranks behind most countries in the world in voter turnout. We want to make election reform an issue our politicians can't avoid, and we start by asking "why do we vote on Tuesday?" because not many politicians know the answer... and these are folks that live and die for election day.

So why do we vote on Tuesday? Because of a law passed by congress in 1845 to make it convenient to vote in a largely agrarian society. Congress came to Tuesday by a process of elimination that makes absolutely no sense today. Literally, it has something to do with people traveling by horse and buggy and having to be back in time for market day on Wednesday. We have the full reason on our website. So we're saying: if your OS is out of date and your computer starts to malfunction, you get an upgrade. Why don't we upgrade our voting system?

What is the main goal of Why Tuesday?

Our founder Bill Wachtel likes to say that our goal is to be a woodpecker on the conscience of America. This is a project that was born out of the 40th anniversary of the Voting Rights Act in 2005. Instead of celebrating, we thought about what we could to to advance the cause of voting rights in America. How do you make voting more secure, accessible and reliable? We don't have the answers, but we want to increase the volume of the discussion about election reform.

You have met and interviewed many politicians - do most of them know why we vote on Tuesday? Did anyone really surprise you with their knowledge (or lack thereof) of American politics?

Most don't know. We've interviewed everyone from Hillary Clinton to Duncan Hunter. I interviewed Republican Senator Dick Lugar at a biodiesel gas station in Noblesvilla, Indidana. He was interesting. I also really liked talking to the both senators from Wisconsin, Democratis Russ Finegold and Herb Kohl.

We have something like 33 videos on YouTube and we put out a new episode of our documentary video blog every Tuesday. We're not just asking "why Tuesday? - we're taking a look at the best and worst practices in America and putting them out there for everyone to see. I'm trying to get a trip together to go to Larimer Country, Colorado this week. In 2004 147,112 out of 157,903 people voted. They have this cool thing called vote centers where you can show up to this central location on Election Day to cast a ballot for your local area. This is really helpful for people who don't live near their job because the polling place might not be open when they leave for work in the morning. In 15 of our 50 states there's no early or no-excuse absentee voting so it's Tuesday or bust.

America lags far behind other countries in our voter turnout. Can you put that into perspective? What are our turnout rates compared to other countries?


We really don't stack up well against most countries according to the rankings by the International Institute for Democracy and Electoral Assistance. Check out this chart.

If election reform successfully moved election day to a Saturday, what would that mean for American politics?

Honestly, hard to say. I saw a study that said voting on days of rest would make people more likely to vote. We did a poll that said 94% of voters wanted casting ballots to be as convenient as possible. But there's no silver election reform bullet. Just changing the day we vote isn't going to solve our participation problem. We have to ask questions about the way we vote too. I'm talking about issues like our voting machines and the electoral college. We explore all this stuff on the vlog.

What is the Why Tuesday? Candidate Challenge?

We asked all presidential candidates to send us their plans for election reform on video. The only taker so far is Senator Joe Biden, and that's only because I ran into him in a coffee shop in D.C. and had my video camera. Every politician I talk to says election reform is worth talking about, so the relative silence on the state of our voting system is deafening. The Candidate Challenge deadline is October 31st so I'm heading to Iowa next week to see if I can bring the challenge to the candidates that haven't responded yet.

You spend a lot of time going between Los Angeles, New York and Washington DC. Do people's reaction about Why Tuesday's platform vary from city to city? Some say politics is taken more seriously on the East Coast, do you find that to be true?

No I don't think so. But more people wear suits on the East Coast.

Reactions to Why Tuesday? are pretty similar across the country. Most people seem to agree that voting should be as convenient as logistically possible for eligible voters.

What can people in Los Angeles do to help?

A few things. Support Why Tuesday? by friending us on YouTube, DailyMotion, MySpace, Facebook and all that fun stuff. We have a support page on our website were you can find all those links.

You can also become a Why Tuesday? correspondent. All it takes is a video camera and some guts. Walk up to a politician, ask about Tuesday voting and chat more generally about what they think we should be doing about our voting system. We'll feature your video on our site... and maybe LAist will too! Check out how to become a WT? correspondent here.

If we wanted to learn more about voting laws and election reform, can you suggest a few publications, web sites, blogs, etc. that we could visit?

Log onto our site and check out our blogroll. My top three for info purposes are Electionline.org from Pew which has all election-related news all the time for every state, the BRAD Blog which is like Drudge for voting reform, and there's Wired's Threat Level blog, which isn't only about voting, but they have some great reporting.

What does success mean to Why Tuesday? How do you picture the American political landscape in 5, 10, 20 years from now?

We want to help increase turnout by making it clear that low voter turnout is not just because of lazy voters. There are problems with the way and day we vote, and we think we should be exploring them closely. So that's what we're doing.

I was talking with our Secretary of State, Debra Bowen, and she wants to see us have the ability to vote remotely in 25 years. From our cell phones and Blackberry-type devices. I don't know what the landscape will look like then. But it would be great to have a quality voting system and a country where voting isn't just seen as a right, but a democratic imperative.

Check out this video on Rocketboom featuring Jacob (and Thomas Jefferson rocks pretty hard in this video too!):