Fire Evacuees are Not 'Refugees' 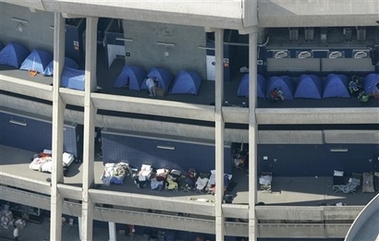 The media's commitment to learning from its many recent mistakes in reporting ethics and the semantics thereof is again being sucked out of the collective memory hole.

Two years ago, Hurricane Katrina survivors were initially referred to by numerous media outlets as "refugees."

While "refugee" can be inferred to be descriptive of one who "takes refuge," the fact is that — at least since the 1951 approval of the UN Convention Relating to the Status of Refugees — the word "refugee" is used in relation to persons fleeing to escape danger imposed by foreign countries or persecution. Yes, a fire is dangerous, but Mother Nature cannot be considered the sole antagonist of a refugee situation (the political implications of the word "refugee" force the argument that in fact, those still displaced because of the government's failings in the aftermath of Katrina can now be considered "refugees," but I digress).

The 4.5 million Iraqis forced to flee their homes as a result of U.S. occupation and a burgeoning civil war are refugees.

The San Diego Chargers are being forced to work out in Arizona due to the fire conditions at their practice field. And nobody's calling LT a "refugee."

I mentioned this yesterday after catching it in both UPI and the San Diego Union-Tribune but its even more disappointing to see "refugee" in headlines for a second day.

Today's refugee-callers, including our own LA Times, exiled after the jump.

-- LA Times -- On the morning after what is being called the largest evacuation in California history, the most visible public face of the relocation was Qualcomm Stadium in San Diego, where 10,000 refugees of the firestorms spent the night on cots and in parked cars.

-- Australia Herald-Sun -- Old and young, rich and poor, an estimated 20,000 people had formed a well-organised refugee camp in the parking lot of the stadium that usually provides a home to the San Diego Chargers American football team.

AP photo of evacuees at Qualcomm Stadium by Chris Carlson.