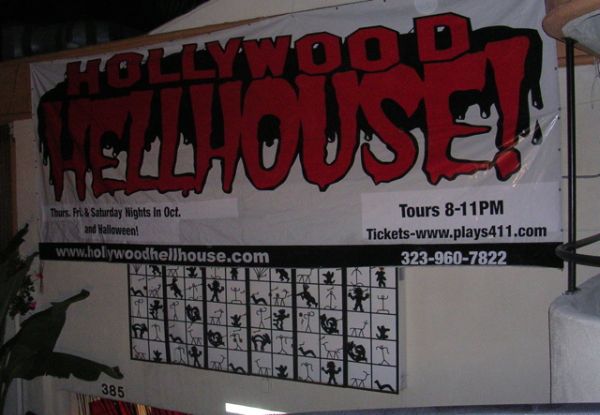 Jessica got rufied and gang-raped. A Harry Potter-loving nerd beat up his sister then killed himself. And a deranged student fired off a semi-automatic weapon into the cafeteria of a high school.

Yes, it was a busy day in hell, as told by the cast of Hollywood Hellhouse. But it was all in a day’s work.

Created by Maggie Rowe, Hollywood Hellhouse is a spoof of Christian-themed haunted houses that are put on by Pentecostals nationwide. By performing very, very graphic scenes of what can land an otherwise God-fearing individual in the blazing fires of Hades, the goal of the real Hellhouse is to literally terrify the faith into audiences.

After watching the 2000 documentary “Hellhouse,” which chronicles the efforts of a small group in Texas to put up the play, Rowe immediately saw the "Waiting for Guffman" of evangelical theater waiting to happen.

The idea was due in no small part due to her upbringing. Raised a missionary and fundamentalist Southern Baptist, she experienced a crisis of faith after watching the movie “Dreams” in college. “I lost my mind,” said Rowe. “I ended up going into a Christian mental hospital, and from there it was a gradual process” towards being officially lapsed.

When she saw that documentary years later, she saw in it “all the things that had been screwing with me,” she says.

The next step was to get on the phone with the man who created the original script to the Hellhouse play, Pastor Keenan Roberts, who now works at the New Destiny Christian Center in Colorado. Rowe told a little white lie about her intent, and then bought an outreach kit to put up a Hellhouse, Hollywood style. The outreach kit, available for the low price of $299, includes the script as well as suggestions for casting, publicity and props, like how to make a passable fetus out of a wad of meat for the abortion scene.

Rowe created the dialogue of her show using exact lines from the original script, thus winding up with the living embodiment of the sentiment, “you can’t make this shit up.” 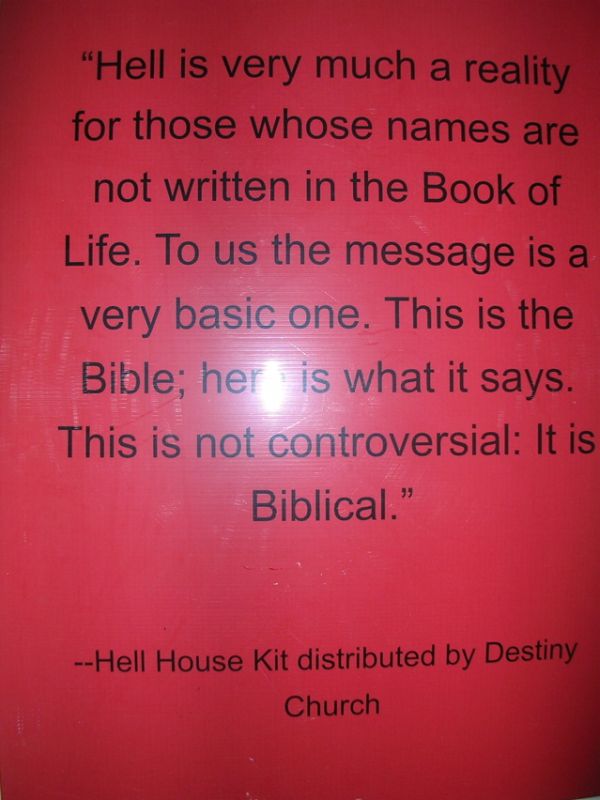 Up for the second time in Los Angeles, Hollywood Hellhouse is running through the end of October in the former Acapulco restaurant on La Cienega Blvd.

Walking into what used to be the entrance to the Acupulco parking structure, audiences will find themselves in a small lobby decorated with a bandstand, little plastic Jesuses and a full bar.

Beginning with an introduction from tour guide, Pastor Ed—who claims to be a recovering gay—the play is a walking tour that winds its way through dark room after dark room of sinful activity.

The actors stay in character the whole time, not as comedians but as real Christian youth groupers, the likes of whom are actually putting this play up all across the country around this time of year. It’s out of these earnest performances that the comedy comes, and that the dialogue, taken out of context from rural middle-America to West Hollywood, makes a poignant statement.

“[Hell house] is very fear and hate-based,” said Jaclyn Lafer, Associate Producer and Director of Hollywood Hellhouse, who also teaches Hebrew School. She said that by doing the show, their goal is to entertain, but also to show that, “this is crazy, that this is how children are being taught about religion.”

As the audience winds through the rooms, the music gets louder and louder and the lights get more and more dim, until the violence, death and misery all culminate in what seems to be commonly referred to as the abortion room. Draped in plastic sheets smeared with blood, the abortion room features a very-pregnant woman who lies bleeding under flickering fluorescent lights, and a gay man in the hospital bed next to her was dying of AIDS. Finally, a 17-year-old who is slowly bleeding to death from having taken RU-486 screams out, “Jesus, save me!”

From behind a curtain, an angel clad in white takes the girl—now dead—into his arms and then rolls her in her wheelchair out of the room.

According to the New Destiny Christian Center’s website, Hell House outreaches “average a 33% salvation and rededication decision rate,” although it’s not entirely clear where that number comes from.

Pastor Keenan has now incorporated a Maggie Rowe character into his Hell House script. “Sometimes,” he has been quoted as saying about her take on Hellhouse, “Satan does God’s work.”

Photos by Jessica for LAist