I Am Taking the Subway for the First Time 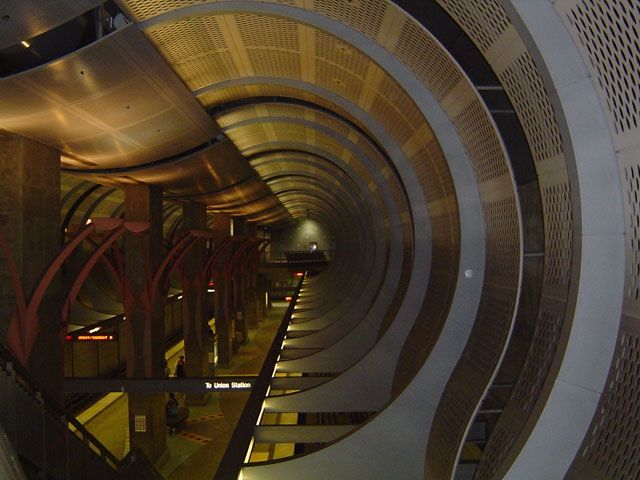 I have to confess something: despite living in the NoHo Arts District, despite working on Sunset and Vine, despite writing for one of the most public-transit-friendly blogs in the city, I have remained hesitant about taking the Metro to work every morning. I mean, it makes sense: the station in NoHo is about a 10-15 minute walk away, it's a quick 10 minute trip to the Hollywood and Vine station, which drops me conveniently close to work — and I can even stop at Molly's every morning for breakfast if I want! So great!

So why has it taken me so long to get on the train?

I love my car.

I know, I know, I know! I'm evil, callous, headed straight for hell, the special kind of hell reserved for puppy-kickers and people who tell dead baby jokes. I'm that oh-so-typical Angeleno who's too busy being blonde and insular and I have zero intellectual life and most of my limbs have been replaced with plastic and I live in a bubble where we don't let in Mexicans except to water our vast superfluous lawns and people from New York spontaneously vomit bagels and pizza slices when they see me!! I go to restaurants only for the celebrities! I know, I know, you don't have to tell me! You hate me and everything I stand for!

Actually, none of that is true (except for the blonde part), but I do admit to being the typical Angeleno when it comes to my car. My car is a part of me: I've owned two versions of the same Honda Civic since high school, and my little silver buddy has always been there to take me where I want to go. Nothing fills me with more joy than to gun the engine and go flying down some wide swathe of Sunset Boulevard, or wind through the canyons at dusk, or head up the 101 for a quick weekend getaway.

But nothing — and I mean nothing — fills me with more rage than driving in traffic. It's gotten so bad that I arrive home from my twenty-minute commute shaking with rage and prickly with frustration. I'm cursing more. I haven't resorted to the middle finger, but I sure love to lay on that horn. It's getting bad.

"Oh, you'll save so much money on gas!" everyone keeps telling me. Actually, that might not be true. I spend an average of $35 on gas every month, which is enough to fill up my tank once. That's right: 35 bucks. What can I say? The Honda Civic is an efficient machine, especially if you drive stick like I do. So it's not so much of a budget issue for me, since traveling round-trip every day on the subway costs $2.50, which works out to $50 for the typical work month -- and yes I could get that monthly pass, but it's still about the same price.

"Oh you'll get to work so much faster!" everyone else says. Actually, no again: my drive time is about twenty minutes one way (yes, again, I'm lucky), while a one-way trip door-to-door using public transportation uses up about 35-40 minutes of my day. However: when the traffic gods strike, as they are apt to do in this city, my drive can skyrocket to an hour or more. And who likes sitting in traffic for an hour to travel seven miles? Not me! It only took a few marathon trips to work before I said to myself, "Self, this is bulllllllshit. There has to be another way."

But if it's not the money or the time, then why am I really taking the Metro? Well, social pressure, naturally. The fine folks over here at LAist just won't shut up about how great and easy it is to take public transportation (Zach Behrens, I'm looking in your direction), and, well, I want to seem cool in their eyes. Before you start calling me names, you have to admit that peer pressure isn't a bad thing in this situation: I'll gladly be a lemming if it means I am putting fewer emissions out into the atmosphere and relying less on nonrenewable energy sources to get around.

Secondly, I'm doing it for simple peace of mind: if my day doesn't have to include driving around Hollywood, which is probably the world's capital of Stupid Fucking Sonsofbitches Asshole Drivers (sorry, Mom), well, that makes me a happier person. And, yes, living on the Westside for four years after college turned me into a hippie "People's Republic of Santa Monica" adherent, so it does make me feel good to do my part towards saving the environment and the whales and the owls and all that stuff.

I'm also doing it for the good of my ass. No, really, literally my ass: it's getting bigger, and I'd like that to stop. I sit a lot during the day, and it's not doing me much good just to jump in the car after work and head straight home. If I take the Metro, I'll get to walk, take stairs, and even indulge in the occasional mad-dash-for-the-departing-train! It'll be great for my mental AND physical health.

Finally, I just think it's going to be fun. I love traveling on the subway in other cities: London, Paris, New York, Copenhagen, you name it, print me out a ticket and I'm there. It makes me feel like a real citizen to take my seat in a train car, pull out my book, and chill with other commuters going about their days. The Hollywood and Vine station dumps you out right across from the Pantages Theater, and walking through the streets of Hollywood these days is an exciting prospect, what with all the construction and movement and progress.

So I'll be trying it out the next few weeks, and I'll be letting you all know how it goes. So if you're on the Red Line and you see a girl in an LAist tee smiling beatifically as she reads her Colleen McCullough novel don't hesitate to say hi. I'm not driving, what reason do I have to be angry?

Photo of the Red Line by Paul!!! via Flickr.