Iranian Rock Show: Not a Paradox 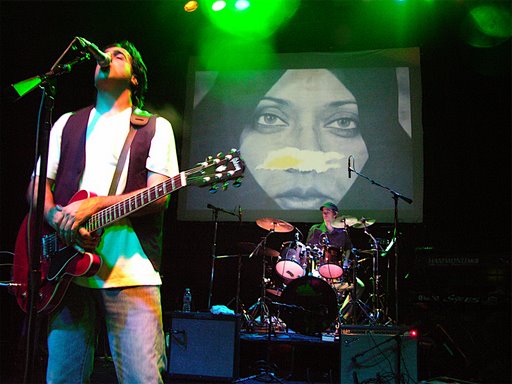 On a sticky dance floor at the Galaxy Concert Theatre in Orange County this past Saturday, pretty girls screamed and jumped up and down in their too-high heels, hipster boys bobbed their heads as they sipped their Stellas, and baldish, grayish dad-types belted out memorized lyrics, flashing devil's horns of approval with both hands.

They were all Iranians there to see Kiosk, a blues/rock outfit that started in the early '90s in Iran's underground (literally - they practiced secretly in basements and storage spaces to evade authorities). Kiosk's sound is frequently compared to the Dire Straits and is a big departure from the pop-heavy Iranian music scene. The band's core members mostly live in North America now, and both their albums, Eshghe Sorat (Love for Speed) and Adameh Mamooli (Ordinary Man), were released relatively recently. The lyrics are heavy on social commentary about Iranian life after the Islamic revolution, but that's not to say it's all heavy delivery: one of their songs is a sort of fill-in-the-blank for Persian swear words - blanks which the audience gleefully filled in at this show (expanding my vocabulary just a little).

The band's shaggy-haired front man, singer/guitarist Arash Sobhani, has a smoky, Leonard Cohen-like voice that's set off nicely by Kiosk's guitar-dominated sound. He was joined by two other guitarists, Babak Khiavchi and Anoush Khazeni, bassist Ali Kamali, keyboardist Ardalan Payvar, and drummer Jason Herdman (a Torontonian filling in for their regular drummer, Shahrouz Molaei, who lives in Canada couldn't get a visa to play this show… thanks, Homeland Security).

Kiosk was also joined for this show by guitar god Ardeshir Farah, who's apparently the Iranian answer to Stevie Ray Vaughan. Though Farah usually plays more classical guitar music as part of the duo Strunz & Farah (you've likely heard their music if you've ever been to a Persian restaurant in Los Angeles), at this show, he was a sweaty, black-headband-sporting, guitar-solo-playing machine. Every now and then, when he wasn't playing, he'd rock out with a joyful, incredibly endearing arm-dance. It made me simultaneously want to pinch his cheek and buy him a shot.

What makes Kiosk truly special is the combination of their sound and lyrics, which may not be so innovative in the English-speaking rock world but is certainly original in the Iranian music scene. This may be why the ticket price to this show was a little steep, at $45 at the door, which is my only gripe. Though, to be fair, the $45 did buy a really professional production that also featured video projection (which again, may not sound like much but definitely took it a cut above most other Persian concerts).

Speaking of videos, the best way to check out Kiosk is on YouTube. The video below, for the song "Eshghe Sorat" (Love for Speed), is arguably one of the biggest reasons their music has gotten so popular among lots of different Iranians (this version has English subtitles, by the way):