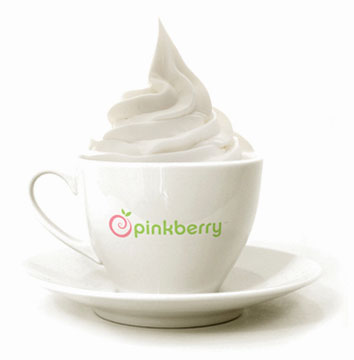 Some are considering it "if you can't beat em - invest in em", but any good judge of fads know that the worst thing that Starbucks could have ever done to Pinkberry is fork over $27.5 million to the local frozen yogurt chain so they can continue to multiply at a rapid pace.

Why would Starbucks want people eating a quasi-yogurt treat next summer at Pberry instead of slurping down a freshly made Frappuchino at Sbucks? They don't, but they do want to get the fad out there for everyone to experience, tire of, and move on.

Clearly no one has moved on from drinking coffee, and Starbucks have proven that people have not moved on from drinking $4 cups of coffee. But froyo, and its urban cousin fadyo has a shelf-life, and if the Seattle chain could make even the bleeding heart granola-eating crowd forget about the cozy local funky independent coffee shops, they can disgust the rest of the country by shoving Pinkberry down the throats of the unsuspecting masses. Thus preventing Pinkberry from being the next Starbucks - something Pberry wouldn't have been anyways. Everyone knows the next Starbucks is just going to be a better coffee chain, not an trendy yogurt joint.

Schultz and Dan Levitan, the other founder of Seattle-based Maveron, want L.A.-based Pinkberry to expand beyond Southern California, where it has 28 stores, and New York, where it has five.

"Pinkberry has an opportunity to build a national and a global footprint," Schultz said in an interview. "It's very rare to see a retail company, so early on, create the kind of customer loyalty and emotional attachment that they've been able to create. In 30 years, I can count on one hand the number of time I've witnessed it." - LA Times

Which means even the chairman of Starbucks knows a fad when he sees it, so instead of fearing the hula hoop, he's going to give everyone he can find a hoola hoop so that it's no longer something that you only find on your vacations to So Cal and NYC (and in December in the OC) - it will be in Iowa meaning it will no longer be special.

And if anyone knows what it's like to not be special it's Starbucks.