Being at UCLA Turned Me into a Hippie Mac User. 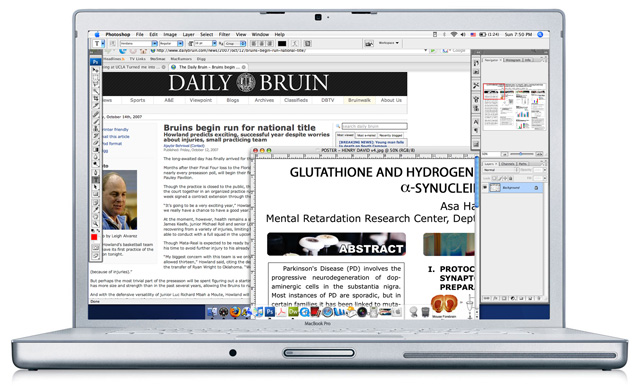 "Revelation satisfies all doubts, explains all mysteries except her own, and so illuminates the path of life, that fools discover it and stray no more."
- William Cowper

Sometimes I wonder how it happened. I try to think about how I used to be on the other side, a Cult of Mac hater...a Steve Jobs-despising PC fanboy. But now every time I boot up my Macbook Pro I think about how stupid I am for not switching to Macs earlier.

Yes, Macs are simpler. Yes, idiots can and do use them. With that said, they are still a marvelous toy for even those adept with computers, such as myself. I never would have dared get a Mac until I started going to UCLA, where most of my friends own one. No matter how much I bagged on them for using a single-button, video-game barren, fashionably white and superficial excuse for a computer, it was I who constantly found himself in dire situations with my Dell notebook. My research colleagues, who basically all use Macs, would get a good laugh every time I lost data.

The hard drive in my Dell Inspiron 700m (that cute little white laptop) had died for the second time in 2 years. It took me three days in between classes on the phone to get patched through to tech support in India. Once you even get through to someone in India, their position is so low-level it doesn't even register on the ladder — they simply don't have the authority to send a replacement hard drive out to you without first putting you through an ultra marathon of over-the-phone protocols.

It was time to say "FUCK YOU" to the world of Windows PC's once and for all.

Without so many people using Macs around me I would have never considered the "alternative".

I don't hate PC's because my hard drive failed. A hard drive can fail in a Mac just the way it does in a PC. I simply hate the direction that customer support in the Dell world is going. I also hate the way Windows becomes more bogged as each day passes or more programs are installed. I hate constantly running virus scans, adware scans, registry cleanups -- all that dumb shit. I hate Windows hot-fixes, program conflicts, incompatibilities, and the blue screen of death.

And thankfully I'm not dealing with any of that anymore in my life. It feels like getting out of your first shitty relationship where you only stuck around because you were stupid and didn't know things could be better. Here's my message to all of the remaining Windows users out there who scoff at this diatribe: quit defending the bitch and move on.

I love my Mac because it is fast. What used to take me hours to render in Adobe Premier on my Windows desktop now takes me half the time or less on my Mac. When I put my Macbook into sleep mode, it wakes up promptly and faithfully. When I used to wake up my Windows PC from standby or hibernation it would sometimes hang for a while, maybe even take a shit and freeze. But most pathetic of all, half the time it never really fully came back from its sleep because it would lag when running programs as if I kicked it out of bed in the middle of REM.

In truth there has never been a better time to own a Mac. Once upon a time, you couldn't even open a Mac file on a PC and vice versa -- that was annoying. You couldn't right-click. You couldn't get software for it. They had slower processors. It was basically just a machine for latte-drinking hippies.

But now you have all those things and more. You can even open PC programs right inside of OS X as if you were running Windows -- and if the program crashes, it quietly takes out itself and not your operating system as well (force quit). Hell, I even think Office Mac is better than Office 07 for Windows.

I'm not imploring you to go out and buy a Mac. I'm just letting you know -- for those of you who are like I am -- that it's ok; if you make the switch everything will be just fine if not better.