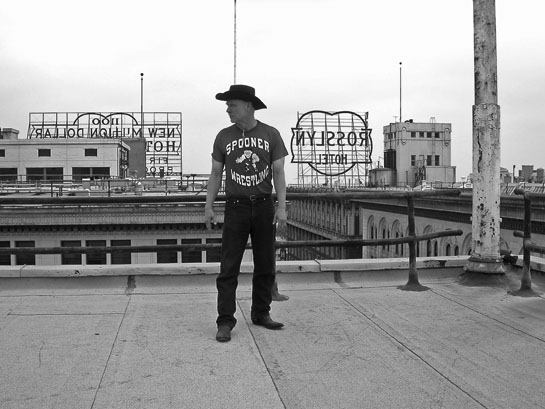 "This is the guy who once called me the worst columnist in America," Steve Lopez explained in his column today about downtown activist, blogger and now King, Brady Westwater.

"I did not," Westwater responded. "I called you the worst columnist in history."

If you move downtown, Westwater will be your neighbor. Try, though you might, you will not be able to shake him. At every turn, you'll see Westwater wearing a cowboy hat and a wrestling T-shirt and jawing about:

A) The numskulls at City Hall. B) The obvious solutions to every problem known to man. C) What a moron Steve Lopez is. or D) The endless magical wonder of downtown Los Angeles. [Steve Lopez, LA Times]

Last December, in one of many of LAist's Best of 2006 Top Ten blah blah blahs, Matt Welch, LA Times opinion maven, wrote in his "Top 10 Best Things About Working for the Evil MSM" that his number four "best" is "the seven phone calls a day from Brady Westwater."

Get to know Mr. Westwater: