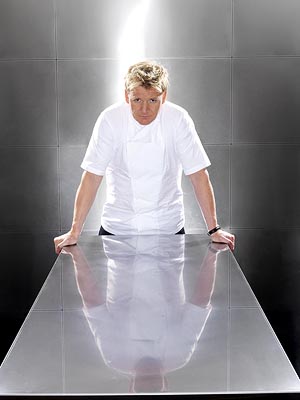 Remember when you were a very little kid and someone else was in charge of getting you to eat? They'd sit immediately in front of you within arms' reach, and scoop up a manageable bite of whatever was on the bland and pureed menu and aim it at your mouth, and when it was perhaps a tougher task to get you to open wide and chew and swallow the spoon became a space ship or a race car or a choo-choo-train, complete with sound effects. "Here comes the locomotive!" you'd be told in a cloyingly sweet tone, "open up the tunnel and let the train in!"

Like a sucker, of course, you'd fall for it, and another mouthful of strained peas and carrots disappeared down your naively unsuspecting hatch.

The folks who were in charge of importing celeb chef Gordon Ramsay's immensely enjoyable UK Kitchen Nightmares series to the States clearly have fallen prey to the notion that the best kind of televised entertainment is the kind that is overblown and mindless—it's a clear enactment of spoonfeeding their behemoth American viewership baby. They took something fully palatable and easily digested and added all sorts of dumbed-down bells and whistles aimed at making their audience drop their vulnerable jaws in order to shove something down their throats.

In short, Fox's version of Gordon Ramsay's Kitchen Nightmares is calling us stupid and feeding us heaping spoonfuls of American crap.

All right, so what is it exactly that we have opened our mouths wide for and are about to digest? The basic premise of Nightmares is that Ramsay serves as the superheroic Mr. Fix-It figure who swoops in to rescue a failing eating establishment. Most of the restaurants he deals with on the show suffer from the strain of bad management--particularly bad middle management--and the nasty, but entertainingly horrific, burden of filthy kitchens and storage spaces. Audiences get to witness Ramsay poking and rooting through boxes of mushy and rotten produce and moving pieces of unused appliances to uncover colonies of roaches, all the while roaring out a chain of expletive-enhanced outbursts of disgust and shock. "Disgusting!" is something you'll hear a lot on this show, along with the distinctive tone of the censor's bleep which obliterates Ramsay's trademark foul mouth. Things smell bad, look bad, and, chiefly, taste bloody awful!

Once Ramsay infiltrates the ranks of staff and owners (frequently happening upon spousal or familial tensions that also make for the epic and Shakespearean sort of drama and/or comedy) he rattles their status quo with New Menu Items! New Management Structure! New tables and chairs! For restauranters theoretically looking to "do whatever it takes" (as they all solemnly vow at the episode's start) most behave as though doing something differently is an alien concept. If it's broke, why fix it? Many involved in a Nightmares do-over learn that it is their manager who is at fault for much of the restaurant's struggles--they're lazy, they schmooze too much, they give away too many freebies. Basically these people have risen to the level of their incompetency, and do a stellar job of being just that: Incompetent. But the owners have loyalties, and refuse to let their dead weight go.

The folks at Fox, of course, come in with shiny network coins and can afford to send in magical elves who install all new gleaming stoves and fridges in the wee small hours, while design teams of crafty little wood nymphs swap in new furnishings and wall-hangings to give the ailing eatery in question a makeover. Here's where the big bucks American television philosophy diverges radically from the simpler and more honest core of the original British show. There, when redecorating is called for, the owners and staff have to roll up their sleeves and do it themselves; since they are so far in the red they clearly can't afford to hire in anyone or buy new stuff. No producer or sponsor waves their magic wand and ignores their financial woes and makes the kind of miracles only can money buy happen--that just wouldn't be realistic. But I suppose that's where what's real differs from what's reality television.

There are plenty more liberties that the US producers (the same folks who bring us Hell's Kitchen, no surprise) take that spoil the sincerity of the brilliant idea that is the crux of the original show. In the UK, Ramsay typically hits the streets of the town where the troubled restaurant is located and works with the staff to create some new hype, whether it be to hand out free samples of the revamped food or to sponsor an event that captures the locals' attention. Stateside, these things rarely happen as part of the restaurant's relaunch, but instead show up instead sometimes in the strange and rushed last few minutes of the show, tacked on and narrated over as being something that happened in the following weeks. But--wait? How can that be? Isn't Ramsay playing indoor football with the chef to inspire him before he hits the kitchen for the relaunch? How is that taking place in the weeks following?

Oh. It isn't. Fox is getting jiggy with their editing, and it's painfully obvious. Yeah, it actually kind of hurts me (points to heart) because it's apparent that FOX THINKS WE'RE STUPID TOOLS WHO AREN'T CLUED IN TO A LITTLE THING CALLED CONTINUITY. I'm sorry, I had to yell that last bit. But come on--small things like what people are wearing or if the restaurant is in pre- or post- renovation mode are telltale signs as to when the footage was taken, and yet it all seems to get re-dealt on whim--or, more likely, to increase the excitement. The chronology is wickedly off and jumpy, and yet we're meant to swallow it as presented; what is this, Quantum Leap? Yes, narrator, whatever you say: "Day One" or "Later that week." Uh, yeah, sure.

This brings me to what I consider to be the worst offense the US version of Nightmares commits: The Smug and Overly Repetitive Narrator (SORN). Recognize that voice? No, it's not Gordon Ramsay (he narrates the UK show, and inobtrusively at that)--but the voice of Hell's Kitchen, holding that spoon of Gerber's strained spinach and wielding it mouthward, reminding us of what happened two whole minutes ago and what is coming up (a REALLY BIG FIGHT! is always coming up, btw). Just in case you can't see what's on your screen, the SORN will tell you--and probably more than once, in case you're slow (and you are, America, you are).

I was so excited when I heard Kitchen Nightmares was crossing the pond, but I also was nervous that Fox would strip away the genuine heart and charm of the show and repackage it in order to pander to their audience, aka the lowest common denominator. It's a fascinating idea to go inside a restaurant that isn't doing well, and to figure out why that's so, and then how to go about fixing it. And Ramsay is an expert, both as a Chef and as a restauranteur--he knows his chicken. He's got great ideas, a knack for cutting out the BS and calling things as he sees them. He pulls no punches and isn't afraid to be direct. But in America, as we see on Hell's Kitchen he is played up as a raging, demanding, cursing tyrant who provokes tempers and thrives on drama. Sadly, though, the heart and soul has dwindled in the Fox show, where the audience is steered towards wanting to see the manager bring a waitress to tears instead of rooting for the sous-chef to rediscover his passion for preparing food. Even though we're purportedly going "behind the scenes" what we're missing are glimpses of the real people and what we're getting are contrived "scenes" of amped up confrontations and acts of vapid stupidity.

Ironically, Ramsay was sued by a former owner of the first restaurant he visited in the UK, Bonapartes, who claimed information was falsified, but in June 2006 Ramsay won the case and took a chunk of change in libel damages, then announced to the London Evening Standard: "We've never done anything in a cynical, fake way." I'm guessing that the suits at Fox were smart enough to work some wording into the contracts of their participants that would prevent something like this happening here. Besides, with kitchens full of shiny new appliances and freshly-painted paid-for walls, how could they dream of complaining? Oh, wait... this isn't a dream, it's a Nightmare!

According to Franklin Avenue, Ramsay & his Nightmares pay visits to multiple So Cal area restaurants, including ones in Moorpark and Tujunga, that will air this season. Kitchen Nightmares airs Wednesday nights at 9 on Fox.