Interview with Molly Prather: THAT Girl 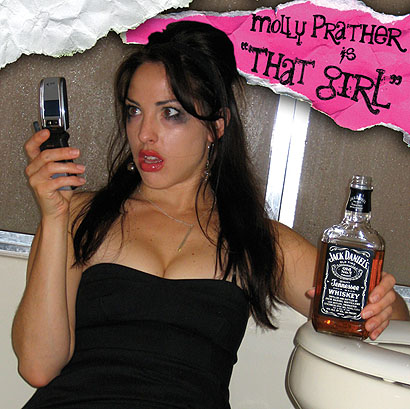 As you scan around most bars you see them all - that girl who's too shy to talk to anyone but quietly judges behind her catseye glasses, that girl who's too drunk to realize she's been flashing the whole room, that guy who's got no game but seems to think he does, or that guy who thinks that a pocket full of money can help him get a hot bartender to do whatever he'd like her to do.

Molly Prather has been performing her one-woman show That Girl here in LA for the last 6 months, mostly at the Upright Citizens Brigade on Franklin (next to Birds). Tonight she will wow the crowd one last time before heading to the Comedy Central Space on 10/29.

LAist was lucky enough to check out the dvd of her show and ask her a few questions about being That Girl.

LAist: Your dvd box cover does you no justice. You look like a mess on the box cover but when one watches the dvd you're a good-looking woman. What was the logic behind all of this?

Molly Prather: I want people to see the poster of the show and think, “Oh girl. I’ve been there.” It’s a snapshot of that moment we’ve all had that is neither sexy nor attractive, and yet completely familiar. Besides, it’s a comedy show – how I look is irrelevant.

You were a bartender. How does a man pick up a hot babe bartender? Pretend the man is "cute enough to go home with if you're drunk" as you say.

In my 8 years of bartending, I’ve never gone home with a single customer. (Insert joke about the married ones.) Although when a particular regular nicknamed ‘Fat Keanu” once offered to buy my a Hillary Clinton diamond-studded pantsuit if I became his lady, I‘d be lying if I told you I didn’t take a moment to consider his offer.

Why are so many people obsessed with not being That girl or That guy - when being obsessive is just being a lamer version of That Girl? Meanwhile aren't the people that we're so afraid of being seem to be having a perfectly good time?

People judge each other. Period. The guy in the Banana Republic Khakis thinks the guy covered in tattoos is a douche bag, who thinks the girl in the pink micro-mini is a dumb slut, who thinks the girl in the Abercrombie ensemble is a bitch. We’re all That Girl or That Guy to someone else in the bar. It’s a matter of perspective. And yet the moment Living on a Prayer begins to play, everyone unites for 4:09 minute Madison Square Garden worthy rock-a-long where they all look like idiots. I say, “Fuck it.” Just do what you do, buy each other a shot, over-tip your bartender and have a night. 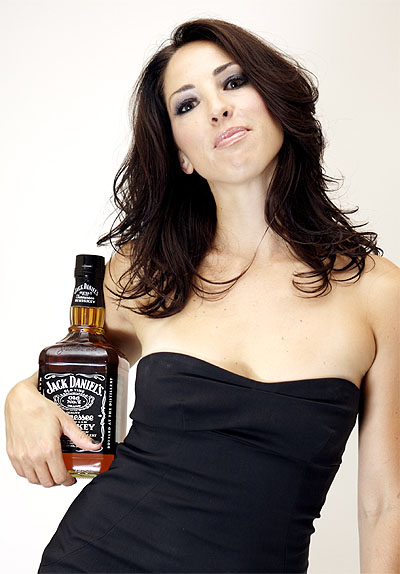 In the realm of comediennes who have made the leap to big bucks we have Rosie, Ellen, and Sarah Silverman. What do you have in common with either of those fine ladies?

Our favorite color is purple. How weird is that? And, you included Rosie and left out Tina Fey. Really? Wow.

Ah, she enabled Jimmy Fallon for too long. One day I'll forgive her. Your dvd doesn't seem to be the type of thing that your parents would enjoy. In it they would hear tales about their cute little daughter drinking, doing drugs, having sex, being offered large amounts of money to get naked - why would you do this to them?

Two things. First, never in my life have I considered myself “cute” or “little.” Second, I don’t think I am DOING anything to my parents. My mom raised me to be a badass. I think that standing up in front of a roomful of people talking about things that the majority of us did in our 20’s - at least those of us having a good time – is doing right by her in that sense.

Being a bartender in the type of bar that you describe in your show must have been eye opening. What was the most interesting thing you saw in your former life?

Strippers. And, their willingness to shove unsanitized items up in there.

On Monday Britney Spears said that she might like to try bartending here in LA. What advice would you give her if she decides to go for it behind the bar?

Keep your shirt on. Save your money. Tell to customers to “Fuck Themselves” early and often. For some reason, people love that shit. And above all else, when you give Last Call and the old, “You don’t have to go home, but you can’t stay here” realize that applies to you as much as everyone else.

On your myspace it says that you're a Scientologist. usually people say that as a joke, yet you're doing your thing for the third week in a row mere feet away from the Celebrity Center. So how long have you known Beck?

You seem to be sweating profusely on your dvd, Nixon. Does it get you hot to know that people are watching?

Girls don’t’ sweat. They glisten. I was glistening.

What's your problem with girls in Ramones tshirts?

My show revolves around the types of people in any given bar on any given night. This involves identifying certain girls based on their clothes and their cocktails. Some of those girls happen to be wearing Ramone’s T-shirts.

None of your show is about LA, yet you're here. Its mostly about New York, yet you're not there. Whaddup with that?

I moved. It’s as much about LA as it is New York, it just happens to be set in a bar in New York.

I think LA is a great place to do comedy. I’ve had the opportunity to perform my show at the Upright Citizens Brigade Theater the last 6 months I’ve had an incredible amount of industry and press attend the show. Not to mention, great audiences full of real people who are just out to have a couple of free beers and a good time.