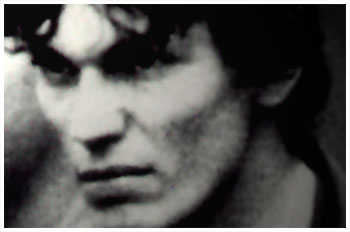 There are some people, mostly retirees, who haunt the halls of the downtown LA courthouses, attending trials for entertainment. High-profile trials are mobbed, but the regulars know the secret is to attend the preliminary hearings instead. When the hearings were held for the Night Stalker, Richard Ramirez, the courtroom was practically empty. I only worked half-days, and I had graduated from taking acid to pills, so I had a lot of patience for just hanging out. Sometimes I took the bus to the courthouse and watched the afternoon sessions of the preliminary hearings. This is where Ramirez pulled a lot of the antics you saw in the newspaper, like drawing pentagrams on his hand, and lunging at the DA.

I often left the courtroom for a smoke when victims took the stand. The "regulars" knew when a particular witness was going to be harrowing or horrifying and warned each other. I was mainly interested in the detective work and forensics - the shoeprint outside a window, the blood spatter - what we now know as "CSI". I didn't want to witness people's tortured tales of horror and fear.

I did hear one survivor testify who inspired me with her courage. She awoke to see the a silhouette in her doorway. He asked, "Where's the money, bitch?" He then shot her husband in the head, and proceeded to shoot her in the head, twice. After he left, she ran to the neighbor's, where no one answered the door, so she started the car. Meanwhile, her husband, who had also survived, ran out with their baby, who was unharmed and she drove them to the hospital - with two bullets in her head. When the prosecutor asked if she saw the person who shot her in the courtroom, she pointed out Richard Ramirez with incredible satisfaction.

Richard Ramirez was clearly more interested in freaking people out than mounting any kind of defense. Witness after witness testified that their intruder used some variant of, "Where's the money, bitch?" After one woman testified that her murdered mother's wedding ring was missing, the defense attorney asked, "Has this ring been returned to you? Was it found on my client or in any way connected to my client?" And Ramirez stood up and confronted her, "Yeah, where's the ring, bitch?" Case closed.

A main part of his freaking people out repertoire was the stare. He would pick someone at random in the courtroom and just stare at them without blinking until they started to panic. I watched him do this time after time, and in my drug-addled mind I would think, "When he picks me, I am not going to look away. No way am I going to let him freak me out.

Then the day came when he decided to stare at me. I was ready, and fixed him with my best steely staring-contest glare. We stared and we stared. Then he started to soften his look, and he started looking at me in a really sweet way. We stared and stared. He had such a warm look in his eyes. I started thinking, "He is kind of sweet. He doesn't seem like the kind of person who would do such terrible things." He must have seen my face soften. He slowly started to harden his expression, bit by bit, until it seemed like he had lost every trace of humanity. It was pure steel. Pure evil. I realized that if you were to look at someone for mercy, if they were choking you, and you saw those compassionless dark eyes staring back, you would know there was no hope. I realized that expression was the last thing many of his victims saw. I visibly started, and he turned away, laughing. He had won.

This was also my introduction to "courtroom groupies". I went to lunch with one of the other girls attending the hearings one day, and all she did was sigh over Richard Ramirez and tell me how she writes to him every day. I said, "You use your own return address? Are you out of your fucking mind?" She said, "Oh he wouldn't do anything to me." I found it so distasteful. I hate to imagine that anyone thought I was there to moon over that madman.

But with such a small room, and with such low attendance, interaction was inevitable. Especially with someone so bored with his own defense he spent most of his time looking around the courtroom. One day I went there really high and I nodded out during the proceedings. The first thing you do when you come out of a nod is look around in a panic to see if anyone caught you. I looked around, and Ramirez was staring right at me. He obviously knew what high looked like, and he knew he had busted me. And I knew I was busted. We both started laughing really hard. I don't know what was happening on the stand, but a bailiff rushed over and warned me, "If you don't stop bothering the defendant, we're going to have to remove you from the court."

After that, whenever he was led shackled into the room, he would catch my eye and tilt his chin up in greeting, the way surfers and lowriders do. I would just glare back. I was not one of his fans.