The Real Problem With Detour

by Tony Pierce in Arts & EntertainmentMiscellaneousNews on October 8, 2007 12:00 AM
Tweet 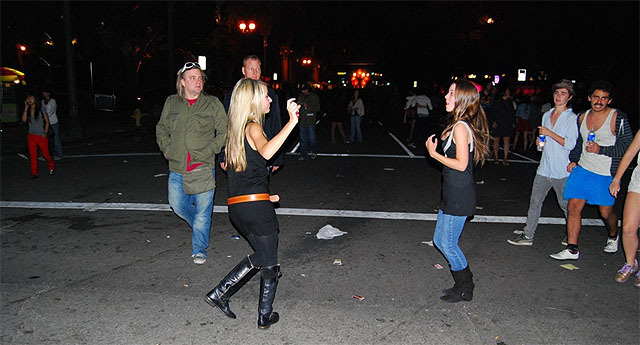 The old folks will blather on about what they think is wrong with Detour, but they're wrong, as always.

Other events do this too, but those events suck. Face it.

Real street fairs let you drink as you eat chicken on a stick and watch bands play on the streets. Sunset Junction for example is a real street fair with real bands and real people walking around all day drinking and rocking out and no one gets hurt.

But freakin Detour is on the steps of City Hall. The cops are everywhere. G-D jail is within dragging distance. Are you telling me that the cops are afraid that people would get too belligerent in an enclosed space that they couldn't figure out how to get them to the jail quickly, if not easily?

Downtown is scary enough. If someone's being a prick, kick em out. Let them be a prick on those streets at night.

Meanwhile do you see the confusion and emptiness caused by trying to party without a drink in your hand? It's nearly impossible unless you're in the desert or on hallucinogens, but no offense, LA, downtown is the last place we'd wanna trip.

And straight up, how are you gonna look cool hitting on a babe while you're holding a half a bottle of Aquafina?

Now see these girls? See how happy they are? That's how we all look when we drink. Why are you happy when you turn 21? Why do you think they call it being an adult?

Please invite me to the outdoor street festival held minutes from the cop headquarters, the mayor, the courts, and the jail, that says "you know what, you're an adult, we're going to have good bands, and girls in roller skates serving beers to whoever's 21. This is America. This is LA. Who are we kidding, there are way worse situations than being able to walk down an enclosed street with a beer while listening to a band."

Detour was perfectly fine, but the streets looked empty. It felt like you were on some backlot where they were filming something about downtown. It was near the subway, it was easy to find, but it was missing a basic element of rock.

But today some wise guy is gonna make a painting of people allowing themselves to be temporarily confined in a small area so they can drink their oh so dangerous alcohol. As if once they leave that drinking area they are completely sober and safe.

The next election needs to have a line in it that says "I believe adults should be able to drink beer on the streets of outdoor festivals."

You are supposed to be presumed innocent in this country. Telling a man that he is better off not drinking a beer while walking around an enclosed festival in the middle of an otherwise mostly abandoned downtown is insulting, bad business, and not rock.

Thank you but we don't need the babysitting.

We want to walk around the fenced off streets around City Hall and we want to drink and we want to buy drinks. Just like how we do in the clubs, arenas, and stadiums. Free the streets.