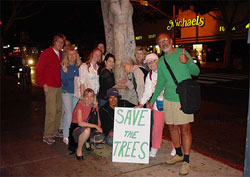 Love 'em or hate em, the works of Santa Monica activists trying to block the city from moving ficus trees from 2nd and 4th Streets have been successful so far:

Protesters obtained a restraining order Friday to stop the destruction of a stand of ficus trees in downtown Santa Monica that the city had planned to remove starting Monday as part of an $8-million downtown development project.

Local activist Jerry Rubin got the order approved by a judge on behalf of Santa Monica Treesavers. The order prevents the city from removing 54 ficus trees on 4th and 2nd streets unless they pose a danger to the public. [LA Times]