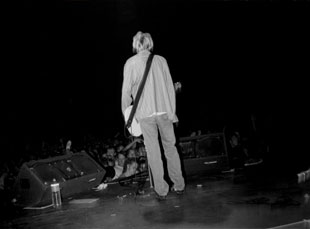 The loud-quiet-LOUD bipolarity and creepy darkness of Kurt Cobain's music comes across loud-and-clear in this excellent collection of grunge, punk, and blues that make up the music of Kurt Cobain About A Son.

The fact that no actual Cobain material is used in this makes it even weirder, and if you ask me, better. It makes you miss Kurt, but appreciate what would be in his iPhone right now if he hadn't shot hisself.

Arlo Guthrie's happy-go-lucky "The Motorcycle Song" on track 3 somehow counterpoints perfectly with the Melvins' spooky and trodding "Eye Flys" in track 4. Next comes Bad Brains followed by CCR, interspersed with quick seconds of interviews from the dead blue eyed rock star that we miss so much. Its short attention span theater for the generations who either grew up with that music or are just discovering it.

This is a better mix tape than you're making for your sweeties, which is weird because how many "Nirvana Influences" tapes have been made in the years after the suicide? A gazillion?

Well here you will have the original David Bowie version of "The Man Who Sold The World" and the Vaselines' "Son of a Gun", both now known better thanks to the Cobaining that took place back in the day. There's some classic Mudhoney included, which, as this video can show you, Kurdt was totally influenced by. Noticeably missing: any music from The Pixies, Black Sabbath, or The Replacements.

The film About a Son screens at the Nuart starting tonight. Knowing that there's a nice bed of good music underneath it makes us hopeful for the film, although RottenTomatoes and the LA Times are already confirming that it doesn't suck. Also the director's blog is right here.

Trailer for the film

The Vaselines - "Son of a Gun"