No Love For The Rice Bowl 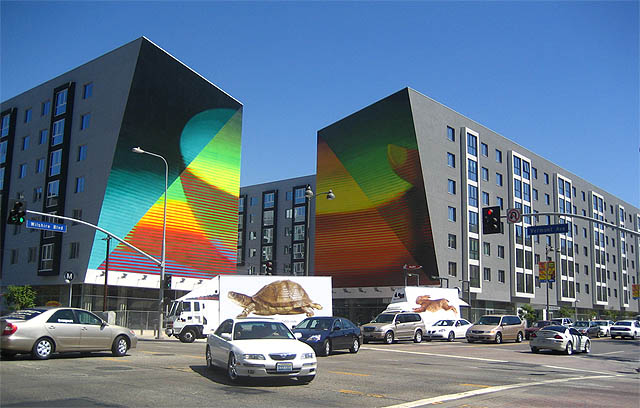 As development wraps up on the first of two major redevelopments above subway stations on Wilshire, the reviews are begining to come in. The Wilshire/Vermont station is just about complete and tomorrow the LA Times will give the design of the complex a negative review, complaining, among other things that it just doesn't fit in with what else is going on with the legendary boulevard.

During the many decades that architects enthusiastically celebrated the Wilshire Corridor as the heart of L.A.'s car culture — our linear downtown — the monuments they produced nonetheless had weight and solidity. The Wiltern, the Superior Court just off Wilshire, even the relatively anonymous Shatto, a Modernist office block directly across the boulevard from Wilshire Vermont Station: All these older buildings can withstand sidewalk scrutiny, even though for most of their lifetimes they have also operated — perhaps primarily operated — as backdrops.

Now that we want our buildings once again to work at the scale of pedestrians and Metro commuters, we've settled into a kind of construction that relies on architectural misdirection or sleight-of-hand and tends to be most satisfying when seen from a moving car. (Responsible for the shift, among other culprits, are those higher building costs and tighter codes.) The more infill construction we pursue, the more aggressively we pack in drugstores and schools next to each other, the less able we are to give them real architectural presence on the ground — or to keep them from looking like every other new project filling every boulevard and shopping center in the city.

The fact that Wilshire Vermont Station is an unusually ambitious example of what is known in planning circles as a TOD, for Transit-Oriented Development, makes its hollowness stand out all the more. - LAT

The Times goes on to blame the fact that the city got very few bids for the project.

In their messageboard, the readers are complaining that the artwork - a distorted image of rice bowl - is part of the problem.