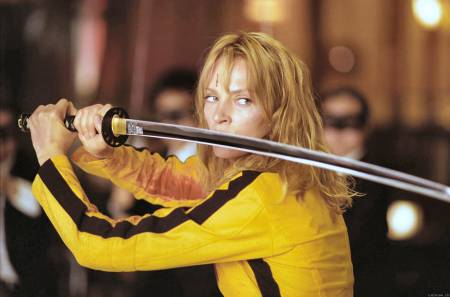 Believe it or not but there's not a lot of hiking happening with many of us here at LAist. Sure there's Zach and a few other show-offs, but even they could tell you that if you start lacing up your hiking boots and notice someone stretching with a freaking sword, things will probably not end well.

Such was the case yesterday afternoon up in Mt. Baldy when three "friends" got into an argument while hiking. One dude whipped out his sword, and - can this be real - another guy pulled out his baseball bat, and all three men GOT IT ON.

Sword guy was Wesley Brockway, 26, of nearby Ontario, and even though he technically won the fight because he sent one of the guys to the hospital with a nearly sliced off arm, since the battle royale happened in LA County, he's actually the loser, he was arrested and sent to jail where he's still at.

Three men set off Sunday to meet a friend along the trail when an argument escalated and one of the hikers started swinging a baseball bat and another pulled out a large sword, investigators said.

The wounded man, whose name was withheld, was hospitalized at San Antonio Community Hospital. His condition Monday wasn't disclosed.

Detectives were heading back up the mountain Monday to find the sword, the sergeant said. - AP

Just another reason many of us brave the wilds of our living rooms.