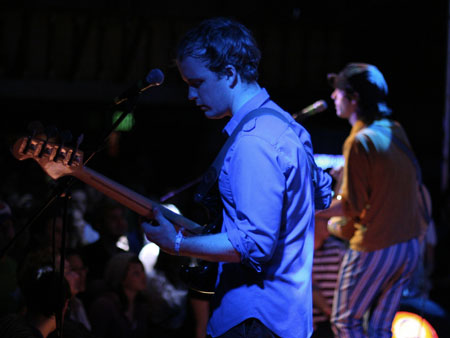 The East Coast quintet sold more than two million copies of its eponymous debut and toured relentlessly for a good chunk of the past couple of years where, somehow, they managed to eek out a new album that is an amalgamation of classic rock, gypsy rock and, of course, their own unique sound.

(Authors note: I know that some say CYHSY is just a rip off of Talking Heads and that lead singer Alec Ounsworth is nothing but a David Byrne impostor, but there is no such thing as originality in music. Everything is a variation on the past and present and, as such, everything is unique. This is not to say that some bands don't suck. Some do. But they suck not because of their thievery, but because their music is altogether crappy. CYHSY just happens to make great, interesting music.)

CYHSY recently embarked on a multi-city, multi-country tour in support of Some Loud Thunder that differed in approach from other tours. Instead of playing to large crowds in larger venues, such as the El Rey- where they played on their last jaunt through LA- the Clapping Hands instead chose to play smaller, more intimate venues, like the Troubadour.

Before last Thursday's show, I sat down with Tyler Sargent, bassist and co-founder of CYHSY.

How does this record differ from the first album?

Someone else recorded it, in a different place and time.

My first take of Some Loud Thunder was that it’s darker than the debut. But, after going back to the first album listening to songs like Details of the War, Thunder seems on par with the first. Is Thunder a darker album?

Yeah, I do think this one sounds grittier, but the songwriting on both are kind of dark. On the first album, some of the songs are immediately catchy, where some of the people don’t realize it’s dark and on the second one, the music can be a bit darker, immediately.

Was the darkness a conscious effort?

No,, not a consciously one. But maybe that kind of thing comes from when bands blow up after their first album; and by that I mean a lot of bullshit. Maybe [this album’s] partly a result of that?

So this album is an exercise in bullshit?

[Haha] Or a response to that.

Is CYHSY more lyric based or music based?

Maybe Alec would say something different, but I think there is equal attention to both.

Your first album was largely popularized by the Internet, and this one seems to be garnering a lot of attention from different sites as well. Based on your success and in your opinion, is traditional radio culturally irrelevant?

Definitely, where we come from it is. There seems to be better radio programs on the west coast, but no one listens to fm radio on the east coast unless it a college station. There is nothing to listen to in New York.

You guys tackled a lot of themes on this new record: poetry, politics, suicide, etc.

Emily Jean Stock is old. Five Easy Pieces is old. Underwater is old. A lot of them are at least as old as the first album. But there are some songs that we’ll play that aren’t on the record. I don’t know where they will appear.

What makes a song good enough to make it on the album?

There are a lot of divergent musical influences on this album. Ray Manzarek's influence can be heard in Satan Said Dance, some gypsy rock, DeVotchKa-like sounds on Upon Encountering the Crippled Elephant, and maybe even some Sgt. Peppers on songs like Love Song No. 7 and Underwater.

Yeah. We all like The Beatles. But we don’t really share our music. We’re all into a lot of different things; So, it’s hard to distinguish or come up with a handful of things.

What are you listening to right now?

A lot of Cher…

Oh yeah? Anything besides Cher?

Nothing really. I mean, what else is there? Next question. No. I like a lot of older jazz now. It’s kind of a phase I’m going through. 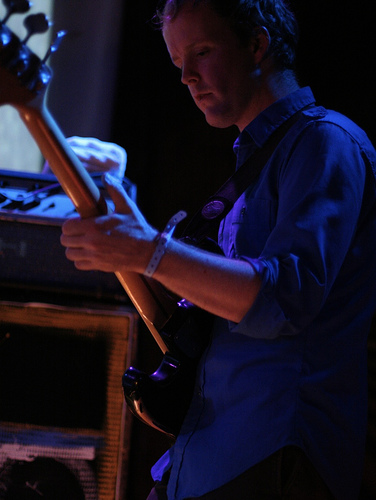 Do you notice from your own music collection, how iPod's have become like city dumps for all our music trash? Which is not to say that our music taste is crap, but, you know, whatever we have, whatever albums we have, we just dump on there.

Yeah, totally. And it’s hard to wade through it sometimes because it’s all alphabetized.

Right. Like if you were to look at your physical record collection on the shelf, you might select something based on either a) its aesthetics, like it’s color, the way the album title is written, etc, or b) it’s placement relative to your memory. Now, it might be about what you see first, unless you have a specific band or song in mind.

So, speaking of names, how did you come up with the name Clap Your Hands Say Yeah?

It was written on a wall in a bathroom in Brooklyn. We were about to play our first show and we had no name, so we took it.

On this tour, you guys are playing smaller venues. Last time you were in LA, you played the Henry Fonda Theater and the El Rey. And now, the Troubadour, which is maybe half the size. Why?

The reason is, we really like playing small rooms and not that those other places are enormous, but 1) It’s nice to play a small room after playing European festivals, 2) We can play a room like this multiple nights out and sell them out and 3) Staying in a city multiple nights is really nice. There is a huge difference between staying here for three or four days [and one]. It’s like vacation versus work.

What are your thoughts on Los Angeles?

Yeah, I like it. I can’t say I know too much about it, though. I feel like when we’re here, we always see the West Hollywood part. We have some friends that live in other parts of the city, but they always seem to come here and meet up with us. I haven’t seen a whole lot of it and I would like to.

It can be a tough city to enjoy because one might see a neighborhood, like West Hollywood, and, if you’re from out of town, think that that’s LA.

Yeah, and in NYC, you can walk anywhere, and take the subway everywhere within a half hour. Just to find a drug store today [took] so long. It’s like a giant suburb.

I think it’s a give and take between the two cities. In NYC, things may be more accessible by foot, but in LA there is more space.

Yeah. I’m not saying it’s a bad thing, but I think its hard to…when you’re stopping here, its hard to get to know it.

Out of the three venues you’ve played in LA, what do you like, not like about them?

The El Rey and Fonda kind of blend together. They’re kind of the same size room. There is a big difference between those places and [the Troubadour]. We were there during big tours where it’s hard to remember specific things about those places

So the smaller venues are more conducive to productivity then, to better gigs and having more of a connection with fans?

Yeah. The show last night was great. It’s obviously very different, but coming from European festivals, where there is not only a giant crowd in front of you, but an enormous security barrier, sometimes 20 feet wide, it can be just ridiculous. Sometimes, the front row there can be farther away than the furthest person here. So, it’s really nice.

You’re playing with Elvis Perkins on this tour. How did that relationship materialize?

We met him and became friends. This is our third tour with them and we really like their music. Musically, I don’t think we would try to get someone that is similar to our music, but to try to find someone whose music we like and can travel with.

In the past couple pf years, some “indie” bands signed to major labels, like the Decemberists and Rilo Kiley While some bands, like Arcade Fire, just say Fuck it, we’re doing it ourselves. I know you guys signed to UK-based Wichita records, but is there any ever thought of signing to a major American label or any label here?

We probably just want to go along by ourselves. The goal isn’t to sell millions of records. We’ve been able to just play music. Some of us keep apartments in New York, which is great. Really, we’re just looking to…live and play music.

Pictures of CYHSY from last week's show at the Troubadour via Flickr from Jennifer Ruidera.