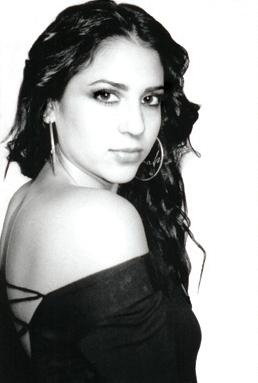 Former protégé of super producers The Neptunes, Vanessa Marquez has sang alongside big names like Justin Timberlake, Usher and Nelly. Marquez, best known as the female voice on Timberlake's hit single "Rock Your Body" is on her own and looking to make a name for herself. The Rialto native, who takes the stage tonight at the National Orange Show Fairground in San Bernardino opening for Omarion and Marques Houston, took some time out from a studio session to speak with LAist.

Tell us how you got started in music and how you got to where you are right now.
I started recording when I was 13, I was just doing demos because I was too young to know what kind of sound I wanted. I did a lot of demos. Years later, I went out to New York and met an A&R guy who really liked one of my demos. It just so happened that he knew Pharrell Williams. He played Pharrell the demo and he loved it. The thing that really got me though was, Pharrell listened to my demo while working with Justin Timberlake who is one of my favorite artists ever. In high school I always told people, one day I am going to sing a song with him and it happened. After hearing my demo, Justin told Pharrell he wanted to have me on one of his songs. Not long after that I got signed to Arista as a joint venture with Star Trak which is Pharrell and Chad Hugo, the Neptunes' label. Then I underwent my album, I did backup vocals with Bow Wow, Nelly, Usher and of course Justin - I sang on "Rock Your Body" and "I'm Lovin' It" (the McDonald's campaign). I was with Star Trak for about four years. In my last year, Pharrell had this big idea to start a Latin girl group singing R&B and crossing over in Spanish language. I thought it was a great idea but it just didn't work out. When my contract was up, I had the option of staying on with Star Trak but I chose to leave. And now I am here. I get to do whatever I want. I've got some songs lining up here and I'm doing me. I'm writing everything, producing myself as well.

Along that path, what is one of the things you took away from it as far as the music industry goes?
It empowered me to do me. To be stronger as an individual and as an artist. You have to fight for what you want to do. Ever since I was a little girl I wanted to be a singer and here I am still singing. Knowing what you want to do and go with it, in the past I used to have producers bring stuff to me, saying here sing this. Now I am like "I like this, let me write something to that, and let me sing this." I now have the freedom to do what it is that makes me, me - Vanessa Marquez. 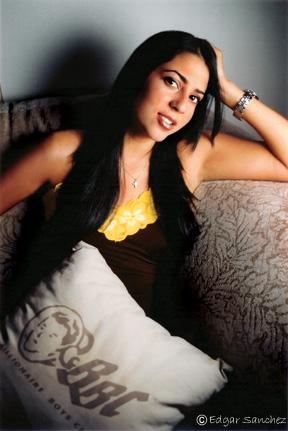 What has been the highlight of your career?
It's probably cheesy because I always go back it, but my highlight is recording with Justin Timberlake. Still, when I am in the club or driving in my car and listening to the radio and "Rock Your Body" comes on I get excited. I'm like oh my God, that's me. I think getting signed is another hightlight of mine as well. Getting signed by two great and well known producers like The Neptunes that I think are amazing felt really good.

How would you describe your current relationship with the Neptunes?
I can still call them up, I can say I need a beat. But right now, I don't think I am at that stage where I need that. Right now, I am just still trying to find out who I am as an artist on my own. Chad and I still talk a lot. Chad's my homie!

One thing that impressed me about you was I sent you a message on MySpace requesting an interview, thinking I might get a message in return from a manager or a publicist or no response at all. But you personally got back to me within a minute or so.
I know there are some artists who are on MySpace but aren't really on it, you know. Then there are other artists who really use to it get personal with their fans and I think that's what I am trying to do. I'm very busy but I want to take time out to respond to everyone, because you never know when there might be another opportunity awaiting you like this opportunity. The songs you hear on my page right now are a little older. They are songs I am proud of but there are a lot of songs that I have that I haven't put out there yet because I am very selective with my music.

What's your short term goal?
I really have to just find me, find my sound. Finding something that is going make me stand out from the rest of the artists that are out there.

Currently you are unsigned, is there a label that you'd love to work with?
I want to work with a label who gets my vision, who sees my talent and sees what I can bring to the world with my music. That's the ideal place for me, someone who sees what I am looking to do and gives me that release date for my album. I have been signed so I know how it works. I was signed and they thought they knew what they wanted to do with me but years went by and it didn't happen. Music changes quickly so does the business.

Ideally, if you could have any artists' career who's would it be?
Mariah Carey. That woman is amazing. Her longevity, how successful she has been for so long, that would be the ideal career for me. 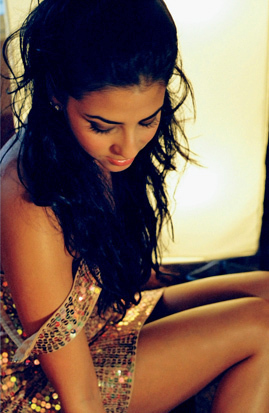 You sang a Spanish language version of Robin Thicke's "Lost Without You," is singing in Spanish a priority to you?
Robin and I wanted to work together, and I loved that single and I wanted to do something different with it so I did it in Spanish. Robin wasn't in the studio when that happened, you know he did a lot of remixes and wanted me on one. He loved the idea of doing it in Spanish but with timing and all it never actually officially got released, but it leaked on some mixtapes and you can hear it now on my MySpace page. As far as singing in Spanish goes, it is definitely a priority to me. I come from a Mexican heritage and I definitely want to record in Spanish.

What are some of your favorite spots in LA?
I don't go out much, but when I do I'll go to whatever is the latest trend. I love going out and dancing but I just don't do it all that much. I'd rather be recording or be at home writing. I also spend a lot of time at church too, I am there twice a week, Sundays and Wednesdays. I just surround myself with my family, close friends and fun and oh yeah I like to shop at the Beverly Center and Melrose.

Any favorite places to eat in LA?
I love Bossa Nova. I love it, everything on their menu is just awesome. I also really like Sur, it's a little hole in the wall but their food is great. The filet, the salmon oh my God. Just thinking about it is making my mouth water. I'm getting hungry.

What do you like most about being in LA?
Well I love LA, I love commuting into LA to record (the studio is located in Burbank). This is where the talented people are, where the artists are. I love it. Just walking around you can see someone, you know big name amazing artist just going about their everyday. Someone in Nebraska doesn't have that kind of access that an artist like myself here in LA has.