Listen to Kathy Griffin Telling Jesus to Suck It!!! 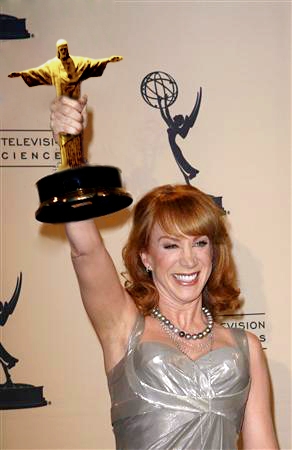 After not receiving a Creative Arts Emmy last year, Kathy Griffin stormed out, flipping off the winners from Extreme Makeover: Home Edition, while shouting, ''I was robbed and you all know it! Everybody can suck it!''

You would think that would be a hard one to top. Especially this year, when she won. But Griffin is never one to disappoint. During her acceptance speech Saturday night, she shocked pious Catholics with the statement, "A lot of people come up here and thank Jesus for this award. I want you to know that no one had less to do with this award than Jesus." She topped it off with "Hell has frozen over. Suck it Jesus, this award is my god now!"

The Catholic League called her remarks "obscene". William Donohue of the Catholic League was so angry that he referred to her as a "bitch". What Would Jesus Call Her? Apparently the clip will be edited out from E's broadcast this Saturday night. Howard Stern played the audio clip Thursday morning, which we have for you at the bottom of the post.

Griffin's only response to the hubbub was this official statement, “Am I the only Catholic left with a sense of humor?” No, you're not, Kathy. And screw those sadistic nuns with their fucking rulers too!

Many thanks to my good friend Adam Bomb for helping me get this rare audio clip:

(A million, quadrillion thanks to Bobby Solomon for his fantastic and quick photoshopping skills!)