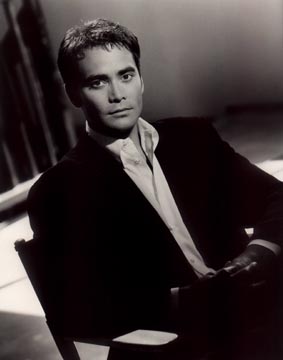 Although some say it doesn’t have nearly as much charm as the original cult sensation, Iron Chef America, is one of the top rated Food Network series since its first airing in 2005. Besides for some of the most inventive dishes one’s ever heard of – fish ice cream anyone? - the mysterious chairman gets to unveil the secret ingredient as well as the winner in that serious/self mocking tone. That chairman's name is Mark Dacascos, and we at LAist interviewed him about what being the IC Chairman is all about, his favorite battle, and the most delicious dishes he’s ever tried in kitchen stadium. Besides for being the Chairman, Mark is an accomplished actor, a Kung Fu champion, a husband, father, and a writer.

The energy in Kitchen Stadium during a battle is amazing. My parents are both Kung-Fu teachers and I fought in Martial Arts tournaments from the age of 7-18. The feeling that's in the air before and during a battle is palpable, and brings me right back to my earlier years when I was the one entering the ring. I get butterflies in my stomach each time I about to yell, "Allez Cuisine." Standing between the two chefs, I can feel their electricity. I get nervous just thinking about it.

What has been your favorite battle so far?

BATTLE CRANBERRIES with Iron Chef Flay and Giada DeLaurentiis vs. Iron Chef Batali and Rachael Ray does stand out as one of the most interesting battles. Rachael and Giada had never competed on our show before, and as all other challengers, were not familiar with our kitchens. They were excited and nervous, and that energy, coupled with the personalities of Chefs Batali and Flay, made for a very fun hour.

Is the food really as amazing, or as horrifying, as it sometimes looks?
The food? I would say that 95% of the food the chefs come up with is simply amazing. I am not, however, a fan of any type of seafood in desserts. If you've watched our show, you may remember certain chefs making ice creams with fish, or parfaits with uni (sea-urchin).
Not things that I would order, but interesting, no doubt. I did enjoy eating turkey ice cream, though.

How many episodes have you shot?
It's been over 3 years since I got the call. Since then, we've fimed 72 episodes and by the end of this season (which starts this week), our total will be up to 92 shows.

How did you snag the gig as the Chairman?

What did your wife think? (Mark's wife is actress Julie Condra who is well known for playing a Fred Savage love interest in The Wonder Years they have three children together, two boys and a girl)

My wife, Julie, already being a huge fan of Iron Chef, and a wonderful cook herself (having completed a professional cooking course at Westlake Culinary Institute), thought it was hysterically funny and very cool that they were interested in possibly having me on the show. Having watched a few of the battles with her and being completely entertained and awestruck by the chef's skills and creativity, I was very excited to have the meeting.

What is your favorite restaurant in LA?

LEILA'S and MARCELLO'S, both located in Thousand Oaks. I know its not really LA, but those are my favorites.

What is your favorite food to cook?

In my regular life, my favorite dish to cook are my Auntie Gwen's Banana Pancakes. My kids expect me to cook them banana pancakes every Sunday morning and I love that they expect that from me. It's become our tradition. I love watching the kids play, and show me their drawings, or explain to me what they've built with Leggo's while I'm cooking in the kitchen. I love having them continually ask me if they're ready yet, and then run away laughing after say, "no," and chase them away by "pretending" to try and pinch their little butts. Auntie Gwen's Banana Pancakes continue to make me happy by bringing smiles and laughter to my own kids. To me, those pancakes mean love.

Lets talk about martial arts. What are your favorite fight scenes youve been in?
The fight I have against Jet Li at the end of Cradle 2 the Grave, and the opening staff fight that I do in Brotherhood of the Wolf (Le Pacte des Loups) are two of my favorites.
The best "HONG KONG" style action I've ever done is in a movie called Drive,
with Kadeem Hardison and Britney Murphy.

Besides for Food Network shows what are you working on right now?

I've been working on a lot of different projects as an actor. I just finished filming a mini-series in China about the life and times of Bruce Lee. His daughter, Shannon Lee, was one of our producers. I play a Muay Thai Kick Boxing Champ who challenges Bruce to a fight.

Mark is currently in New York City, filming a new show for the Food Network where they're searching for a new Iron Chef. Photo via Dacascos.com