El Tepeyac Cafe: Pull Up a Seat at Manuel's Place 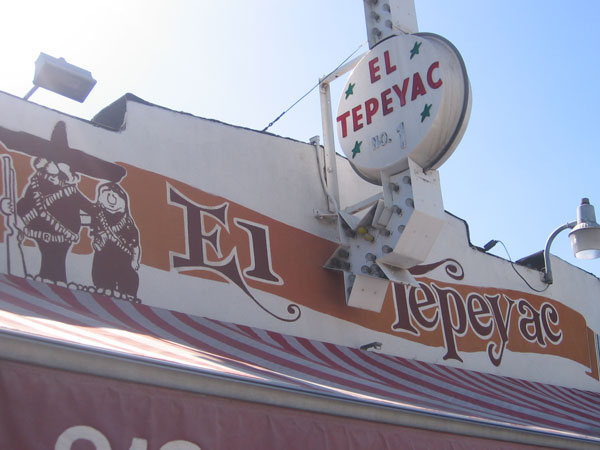 There is no question that El Tepeyac Cafe, a fifty-plus-year-old Mexican establishment in Boyle Heights, is legendary. Stories swirl amongst foodies, local and otherwise, about the monumentally oversized burritos and equally over-the-top owner, Manuel. My parents tell tales about the "poor old days" when they would hungrily dig into one of the "Manuel's Special" burritos, whose four pounds of meat, rice, and beans was enough to feed two skinny kids for days on end. No visit to the East Side would be complete without a stop at El Tepeyac, where the ever-present line outside the door isn't enough to deter locals who have depended on this place for their burrito fix since time immemorial. Even Hillary Clinton herself visited back in 1998 during her "Save America's Treasures" campaign — although she hardly did justice to the Special.

So does El Tepeyac live up to the hype? Is it the best burrito in the city? Probably not. The portion sizes can't be denied: it's a good deal for the money (a Hollenbeck or Okie Burrito for about $7.50, Manuel's Special is about $11). But the meat (machaca, pork, or carne asada) is hit and miss, the rice & bean filling nothing special, and although the red chile sauce that coats the wet burritos packs a punch, it took several additional spoonfuls of salsa to get my Okie up to proper spiciness standards.

With all of this under consideration, however, is El Tepeyac still worth a visit? Absolutely. Let me tell you why. 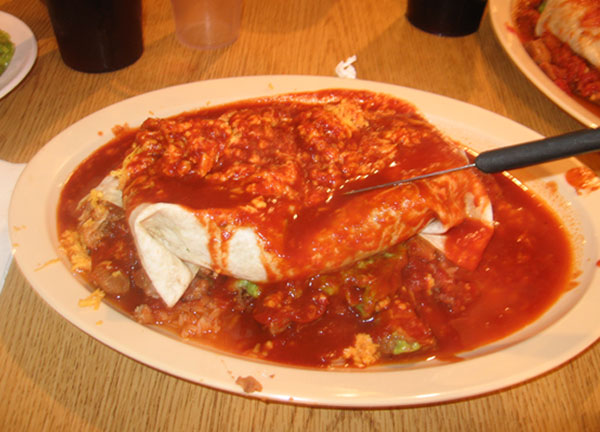 Perched on a sunny hill-top street in Boyle Heights, right across from a bustling Catholic church (an especially cheery locale on Sundays), the restaurant has a homey atmosphere and a casual vibe that really hits the spot if you're in the mood for a lazy Sunday lunch. Service is prompt and efficient, but nothing compares to a visit from Manuel himself, who has owned and operated El Tepeyac for over fifty years. He's the reason that generations of Angelenos return to this place, gathering their children and grandchildren around a modest table to genuflect at an altar of Californian authenticity.

Manuel is a wizened little man in a dishwasher's apron, with a raspy, time-worn voice that carries strongly throughout the small dining room. He cuddles babies and kisses women on the hand; he also carries around three varieties of tequila in plastic apple juice bottles, which he disperses with a free hand to all patrons -- even at 11 in the morning. At one point during our meal, he perched himself high above the diner counter and cried out: "Merry Christmas everybody!" And you know what? Everyone in the place responded "Merry Christmas!" right back at him. Probably because they were all a little drunk. Nothing wrong with that. 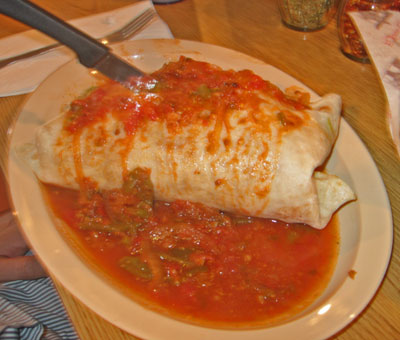 Your best bet at El Tepeyac is definitely to order one of the famous burritos -- there's the Hollenbeck, stewed pork with rice, beans, and guacamole resting under a shroud of soft tortilla and coated with ranchero sauce. This is not a pick-it-up-and-eat-it kind of endeavor: this is a serious fork-and-knife kind of thing. The pork is dry, to be sure, but flavorful and tender to the tooth, a sign that it's been stewed long and low. You can also get it with machaca, and some versions come stuffed with egg. The Okie burrito is similarly constructed, but doused instead with a vibrant red chile sauce.

Or if you're the type who goes big or doesn't got at all: there's Manuel's Special. Four pounds of meat, cheese, guac, rice, beans, eggs, and whatever else you want thrown in there. So large it's almost laughable, but probably still good the next day.

You can get any of these burritos with chicken or even in vegetarian form, but the rest of the menu is also extensive and worthwhile. Chile rellano burritos, tacos of all kinds, menudo, enchiladas, the gooiest, brightest green guacamole you have ever laid eyes on, flautas, and dinner plates with seafood, chicken, pork, or beef. Don't forget the jamaica and the horchata to balance out the spice of the excellent house salsa.

It's sometimes hard to understand Manuel's wheezy story-telling, but even the snatches you do catch: "West Point -- President Roosevelt -- arthritis -- fifty-six years!" are filled with history and love. I would venture to say that you're not a real Angeleno until you've pulled up a seat to one of those formica-covered tables and shared a tequila shot with Manuel. He is the proud parent of those fat baby-sized burritos, and even if they're not the best you've ever tasted, this place won't fail to put a smile on your face.