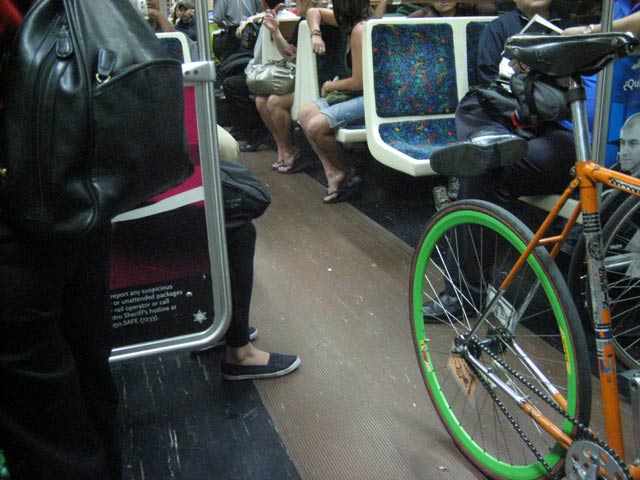 Could you imagine what LA would be like today? A Los Angeles with a subway down the god friggin' most congested city street in America?

Instead we have the one of the nation's busiest rapid bus lines, the 720, which the Sniper suggest should be dedicated to Waxman himself to remind bus riders why they are on a standing room only bus for over a hour traveling from Santa Monica to downtown. The 720 Rapid is so busy, that the bus line needs its own rapid, the 920 Rapid Express.

Only two or three of the dozens of riders contacted over the past three days ever heard of you [Waxman]. I ended up informing them, including a few of your constituents in the 30th District, about your role in derailing the subway program after the 1985 methane explosion at a Fairfax-area Ross Dress for Less store. Seizing on the methane eruption, you got your colleagues in Congress to ban the use of federal dollars paying for any tunneling west of Fairfax; a ban tinged with your constituents racism that, to your credit, you finally lifted this year. [LA City Beat]

Yes, to his credit, Waxman did lift the ban earlier this summer. So now we can start what was supposed to be done 20 years ago. If that were done then, maybe we would be now focusing on 405 solutions between the Valley and LAX, something that is hardly even spoken about with any official means. And when it is, all we hear about is how Bus Rapid Transit, a la the Orange Line, is the hot phrase in D.C.

Nevermind that a subway tunnel from Sherman Oaks to UCLA could take a total of 7-minutes to traverse, we have the 761 Rapid which takes 45-minutes in light traffic. And speaking of the Orange Line, a D.C. congressional aide once told us that many members of congress think the Orange Line runs down Wilshire. Now that's helpful. We're looking for $5-billion and congress already thinks we have it. This is so cool.

Okay, it's not like Waxman is some horrible old man, people can gain some wisdom over 20 years. The guy who derailed the subway is actually a little green bean himself. The Global Climate and Ozone Layer Protection Act of 2007 and the Safe Climate Act of 2007 have both been introduced by him. Does a subway fit in anywhere in ozone protection and a safe climate?