The Little Man of Los Angeles 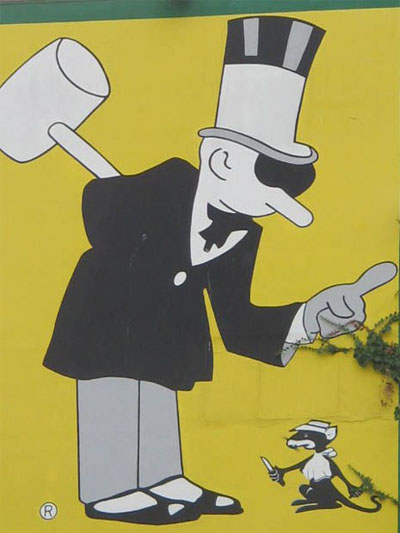 You’ve probably whizzed by his 17-foot image dozens of times or been stuck in traffic behind one of the many trucks that he rides on. The Little Man with the Hammer, the trademark of The Western Exterminator Company was born in 1931.

The creation of telephone company artist Vaughn Kaufman, “The Little Man” has been used as the trademark for this family-run company (celebrating it’s 86th year) ever since. The Los Angeles icon known over the years as “Kernel Kleenup”, and “Inspector Holmes” among other monikers, has had appearances in such film classics as “Earth Girls are Easy”, “Echo Park” and “Die Hard” to name a few.

In recent years, the beloved authoritative figure, has been very popular as a collector’s item in the world of advertising memorabilia, and still makes occasional “live” appearances at company functions.

Photo by Jennifer Saxon for LAist