by Elise Thompson in MiscellaneousNews on September 3, 2007 12:00 AM
Tweet 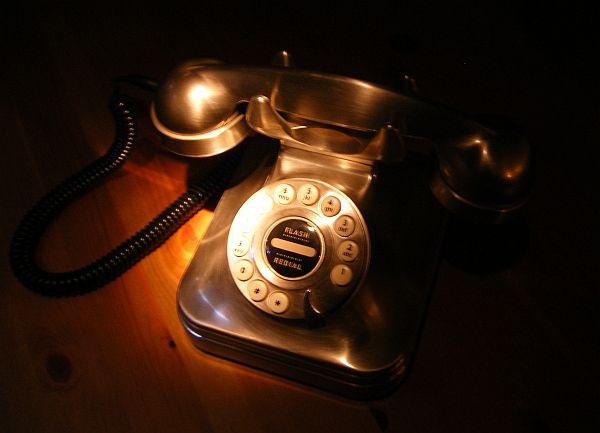 "Hi, this is Jackie Payne with Impact Distributers...I'm just calling to let you know that you have won one of FIVE fabulous prizes!"

Yes, I worked phone sales...I was the lowest of the low. In fact, it was not only phone sales - it was a phone scam. When I was 18 I used to work at a place called Impact Distributers in a high-rise in Marina Del Rey. My ex-boyfriend Harlan got me the job. Harlan was like a cross between Charles Manson, Ratso Rizzo, and the lead singer of Kaja-goo-goo. My other co-workers were Dave Markey, Janet Housden, Steve McDonald, John Press, a Latina housewife, and various random young girls who came and went. I was actually one of those random young girls myself now that I think about it.

I mostly remember drinking tons of coffee, and random things like Janet taking non-smoking breaks, and Steve calling the number off of the Doritos bag to claim he found a bug in his Doritos, "I didn't see it at first because it was covered with nacho cheese powder..." I remember Dave's last day, when he kept saying, "I'm a bad machine. I don't work. I don't work. I'm a bad machine."

One day we were all on the phones, ripping off Mr. and Mrs. America, which we didn't really mind because it was 1985 and we hated Mr. and Mrs. America. Our boss came into the room screaming that there was a raid and we all had to run. We looked out the window and there were Sheriff's cars and helicopters all over the place. A few people ran off with the cokehead boss and squealed off in his overcompensating sports car.

Harlan, Steve and I went down the back stairs. As we ran through the stairwell, we got our story straight...we were just visiting Steve's aunt. We ran right into the arms of the Sheriff's Department. They immediately separated us to see if our stories matched. The officer aked me what Steve's aunt's name was...oops. "Jeanette?" The cop asked, "Jeanette McDonald?" and looked at me, like, "Do you think I'm retarded?" I was wearing a thrift store coat with torn pockets and no lining, so when the cop was searching me, he thrust his hand into my pocket, and his arm slipped in all the way to his shoulder and he almost fell down.

My last day at Impact was also a memorable one. Harlan had gotten my best friend, Samantha, a job at Impact. He also started sleeping with her. He just forgot to break up with me first.

One day Harlan and Samantha came in really late. I made some kind of smart remark. After they sat down, Harlan mumbled, "Hosebag" at me. It sounds stupid now, but it was so fucking demeaning and offensive at the time. I picked up my phone so I could throw it at him, but I realized that it was attached to a bunch of cords and wouldn't make it very far. So I pitched my coffee cup at him and hit Harlan right in the back of the head (I've always had good aim).

Now, we worked at nine card table "desks", three across, three back. Harlan sat in the front left corner table. Samantha sat behind him in the second row, at the far left table. John sat in the very center table next to Samantha. If it were Hollywood Squares, he would have been Paul Lynde. I sat behind John in the middle of the back row.

As the mug flew towards Harlan, the coffee spilled out all over Samantha, who just happened to be sitting in the trajectory right behind him. She started screaming, "You burnt me! You burnt me!!!" Harlan took a flying leap at me, and John actually caught him mid-air, where he wriggled in John's strong arms like an angry child. Most of the card tables had been upended in the ruckus, and telephone cords were strung around the room like those laser security systems you see in action movies. Coffee was dripping everywhere, Samantha was screaming, Harlan was wriggling, and Steve and Janet had ducked, tucked and rolled under their desks. I thought it might be a good time to take my leave of Impact Distributers. Does that make sense to you?