by Carolyn Kellogg in MiscellaneousNews on September 3, 2007 12:00 AM
Tweet 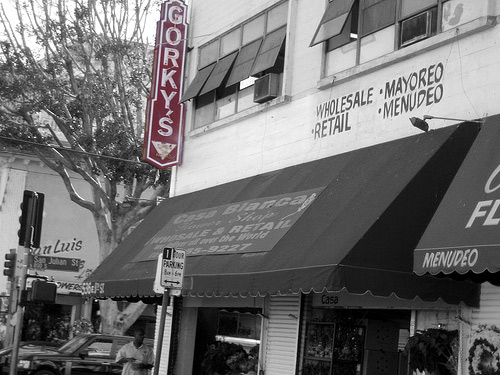 By the time I got to Gorky's Russian Cafe, its communist-leaning founder had sold out to a south bay capitalist named Fred. He hired me as a server, promoted me to cashier, then made me manager — of the 1am-9am shift. From 2-6, I was the only staffer there at the corner of 8th and San Julian downtown.

People would come in after Jac Zinder's dance club, or a show at LACE, arty people cooler and older than me. Sometimes they'd spot our well-stocked international beer cooler and beg me to sell them a bottle after 2am, and occasionally I would. But mostly I followed Fred's rules, which included charging cops half price. The neighborhood was pretty rough then — a block down was serious crack corner, and Fred thought greasing the gullets of the LAPD would get him preferential treatment. One cop realized the deal and made me re-ring him up: giving cops a discount was illegal, he told me. I felt bad; the food at Gorky's wasn't all that cheap, and most of his buddies just went along with their discount.

I only had to call the cops once. I was restocking the beer cooler, around 3am, when something made me turn around. Behind me was our emergency exit, a glass door. On the other side of the door was a huge guy with his pants around his knees, jerking off as he watched me. I ducked away and grabbed the phone, trying to stand where he couldn't see me. I told the LAPD what was happening, and they said they'd have someone out in about 20 minutes. "Thanks anyway," I said. "I don't think he's going to take that long."

Some people who remember Gorky's think of its second location at the Tick Tock in Hollywood, or of its microbrewery, but this was before those "improvements", when Gorky's was just an all-night cafeteria across from the flower mart and near lofts that were so cheap artists could live in them.

Things always got really quiet after the proto-hipsters moved on and before the flower mart customers started showing up for their coffee and Vivaldi (fucking Vivaldi). One 60-ish homeless woman would come in around 3 or 4 and kind of sleep in one of our wooden booths, and while I was supposed to roust her, sometimes I'd let her stay just for the company. By the time I'd been there a few months, I was popping crosstops in the bathroom just to stay awake. You could still buy them legally at gas stations then -- in some states, anyway.

It was in those wee hours that one guy started showing up regularly. He was so shy that he'd blush when I'd tell him that his coffee and muffin came to $3.45. I think he liked Gorky's deserted; hed sit in a corner and write. Every night he got the same thing: a cup of coffee and an orange-and-chocolate-chip muffin. Eventually he told me his name (Greg), that he was in school (UCLA) and what he was writing (a screenplay). He was worried that one night he'd come in and we would have sold out of his favorite muffins. They were awful -- orange and chocolate chip? -- but I didn't have the heart to tell him that they were the only kind that never, ever sold out.

Everyone's writing a screenplay, right? But it was this Greg -- and the way I remember it, he was writing Highlander, although now I don't see how the dates fit. Maybe he was already working on Backdraft.

Eventually it wore on me -- the crack-addled, the happy arty people, the overpriced stuffed cabbage, the fucking Vivaldi, even the screenwriters -- and I quit to go back to school. And see daylight again.