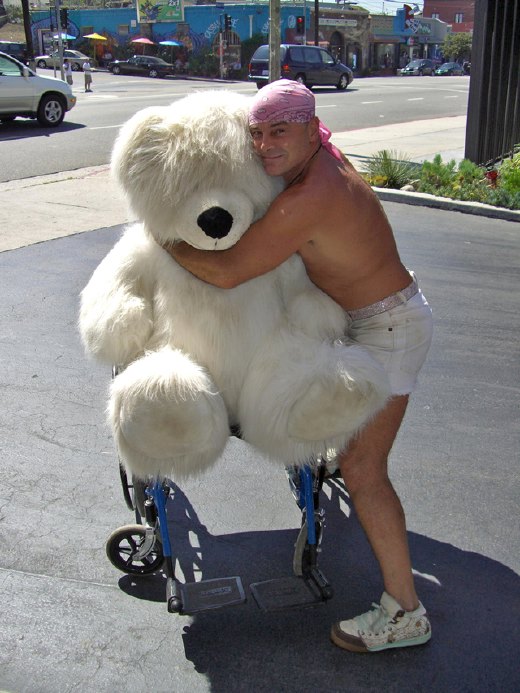 If you live, eat, or have ever been to Silver Lake you've seen the Five Dollar Guy around. He has murals, fans, pictures and stories online dedicated to him. But who the hell is this character and where did we find him?

Who is the Five dollar Guy?

Five Dollar Guy: He's the guy with the buy you need to see before you die. He's the man with the plan, the dude with no attitude.

Why are you the Five Dollar Guy?

My goal is to get $5 from every man woman and child on earth. I save landfills, aluminum, plastic, the homeless and the downtrodden. But most of all I save my own ass.

Have you always been the Five Dollar Guy?

Were you born in LA?

Have you been in the Silver Lake area since you moved to LA?

Actually my first apartment was at Formosa and Santa Monica, i paid $500 for a one bedroom. But than i found a little shack over by Virgil and Melrose for $325 so i moved there.

Where do you live now?

In my van which is parked next to jiffy lube at the Sunset Junction. I have been homeless for 9 years now. I had a tent at the garden down the street, But moved up to the van recently. I haven't paid a bill in 10yrs and I'm very proud of it.

What's it like being a famous homeless person in LA?

When I first became homeless I saw it as the end of my life but it was really the beginning of a new life. My whole life i worked my ass off just to make sure i would have my money for rent and bills at the end of the month, but now i focus on what's really important. I'm my own boss and work my own hours. There is a group of people out there who were friends of mine before i was homeless that refuse to associate themselves with me anymore.

Where do you get your merchandise?

People buy things that they don't need or think they want, a bit of time passes and they realize that they have no use for them and they just throw it away without ever touching it, That's where i come in. I find hidden treasures in peoples garbage. Every week someone dies of AIDS with in an eight block radius of where i live and the landlords will throw away everything because they're afraid that their belongings might have AIDS as well.

What does the neighborhood think of The Five Dollar Guy?

Tons of people don't like the five dollar guy, and if you don't like him you better get in line. One side of the street loves me, They welcome me into their shops and let me hang around to sell stuff to their customers. I get free gelato from Pazzo all the time and have yet been charged for a single one! I talk to their customers and sell them what i have to offer without any trouble. However I'm banned from most of the businesses on the south side of Sunset. But it changes with the seasons, Just give it a few months and I'll be on the other side of the street.

I once found a 6 pound can of beans and pork over by Griffith Park, So i walked up to a family grilling some meat and offered it to them for 5 dollars, They shot me down right away. So I walked up to a guy sitting on his own and told him "Sir, my friend gave me this huge can of beans and pork, but i don't have a working oven at my house and i'd hate for it to go to waste, but i'll sell it to you for 5 dollars." No hesitation he pulled out 5 dollars and thanked me for helping him out. Sometimes you have to overcome the objective to get the goal.

How about all the rumors? Like your apprentice, and hundreds of pink bandannas that you wash at the laundromat? And the time you ejaculated on a storefront because you were banned from the establishment?

I have no apprentice, The five dollar guy works alone. I only have one bandanna but i do believe in good hygiene so my clothes and bandanna are washed on a regular basis.
I promise that i have never ejaculated on anyones property unless they wanted me to.

What is the downside to living in a van?

Bringing people back to your place to entertain. I'll meet people who want to party with when i bring them back to the van they get freaked out. But some people get a kick out of having sex in a van, or an abandoned house. It adds to the excitement.

Thank you for your time, I'll let you get back to your hustling.