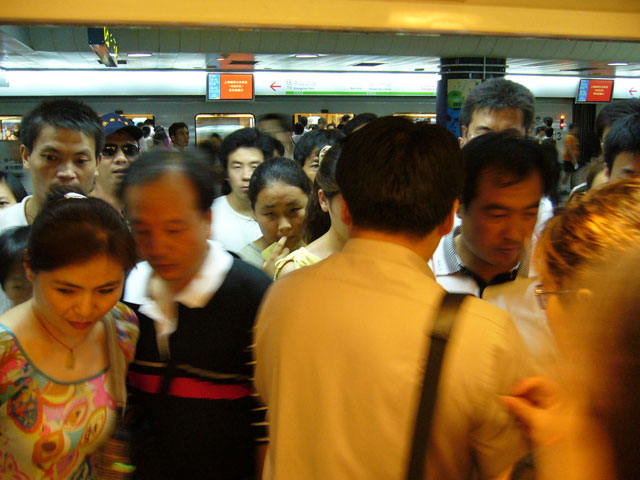 Today in Column One of the LA Times, Mitchell Landsberg along with Cao Jun examine Shanghai's subway system of five lines and 95 stations that serve 2 million people a day (with six lines scheduled to open in a couple of years). Juxtaposing it to Los Angeles with that fact that construction in Shanghai began four years after LA's Red Line, it makes our city look a bureaucratic embarrassment hung up in NIMBYism and funding issues:

At the risk of only slight oversimplification, the [Shanghai] system works like this: Planners draw subway lines on a map. Party officials approve them. Construction begins. If anything is in the way, it is moved. If they need to, Chinese planners "just move 10,000 people out of the way," said Lee Schipper, a transport planner who has worked with several Chinese cities in his role as director of research for EMBARQ, a Washington-based transportation think tank. "They don't have hearings."

The enjoyable and well-written article sounds like a fantasy for transportation planners and advocates alike and a homeowner's worst nightmare. But in China where the government will openly ban opposition, how much of a fantasy is it?

"It's curious that it didn't get to anybody at the Shentong Metro Company, which operates nearly the whole Shanghai subway system," Sittig explained. "I'm also surprised that it couldn't find or didn't try to find anybody who was unhappy about being evicted from their houses because of metro construction. The reason that Line 9 won't be connected to the rest of the subway system until a year after it first opens is that the city ran into trouble with people who wouldn't move out at the Yishan Rd. Station construction site (where Line 9 would have connected with Lines 1, 3, and 4)."

And what about opinions against the Shanghai Metro system?

"The Chinese-language online Shanghai metro BBSs that I lurk on looking for news self-censor themselves *very* strictly because they can get shut down by the net police for allowing any sort of 'subversive' content onto their forums. They regularly ban users and erase their posts (actually, the posts are still there but the contents are replaced by 'This user has been banned from the forums' so the traces of the bannings are very clear), and close entire sub-forums due to discussions of evictions getting out of hand, stating very clearly on the main page of the forum that opinions against the government are not allowed (and they say this with no irony at all, at least not in the open)"

Sittig happens to live in one of the housing developments made for residents displaced by Line 10:

"Funny, my landlord is one of these people. His extended family got five or six houses out of the deal, one of which I am renting for a reasonable sum here in the Century Park area (less and less out-in-the-boonies every day!). Actually the entire apartment complex I'm living in is 'dongqian fang,' resettlement houses, built by the city gov't and given to people as compensation for city-project related evictions. A Shanghainese would say that the 'suzhi shuiping' (hard to translate) of my apartment complex is low because it's full of farmers, but actually they are very nice people."