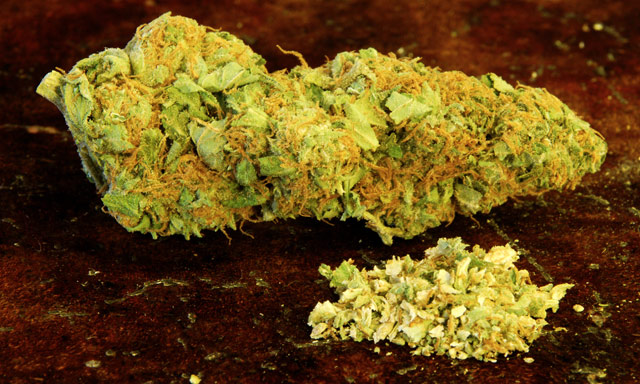 We bought an 8th of this stuff from the living room of a shirtless guy with a goatee. It's a popular and familiar strain known as Green Crack and also sold on the market as Mango. People sometimes nickname it "Gee-Cee" for the initials.

Pre-Smoke Examination:
The nugs are long and thick, and come to nice points. They're spongy when you squeeze them, but they're dense as hell. The smell is a sweet fruity funk, hence the alias Mango. These nugs got a hurried manicure by the grower, and could use some extra clippings. The buds are dried just right, and appear to be fairly fresh off the vine. The green is so bright you almost need sunglasses to look at it.

Post-Smoke Examination:
Because it's so dense scissors or a grinder are recommended, otherwise you have to pinch it so hard you might bruise the buds. When ground the pile feels fluffy and soft to the touch, proof of the perfect moistness. The weed burns steady and not too fast, making a nice even hit that isn't too harsh or strong. The taste is smooth like an orange Gatorade, and leaves you wanting more.

You're baked as hell from one bowl, and the high hits you fast. You're stoned for at least 2 1/2 hours, and if the name "green creack" holds true for you as it did for us, you'll snap at least two bong hits just for the flavor alone. At $60 an 8th it's a deal, and we'll buy more of this until it's sold out. 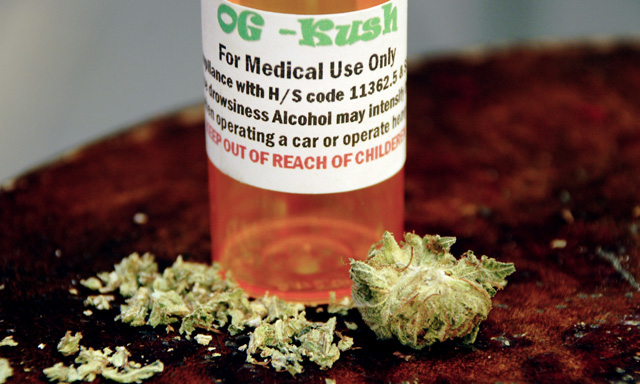 Our friend stopped by the house and had some pot he got from a clinic. It came labeled O.G. Kush, but he samples much more than we do, and with his expertise deduced that it was Bubba Kush and had been mislabeled by the dispensary. I did not smoke any of it, i asked my friend how he felt, and took notes on his answers.

Pre-Smoke Examination:
They're dense round nugs that are no larger than a quarter. They make an audible thud on the table when dropped. They are so dense that they're extremely firm, and don't give in when squeezed, showing good moisture levels. They have dark red hairs, and smell like a pine forest.

Post-Smoke Examination:
The small nugs break apart well and are the perfect size for a grinder. The ground pile smells strong and is sticky on your fingers. The bowls burn on the slower side, lasting a little bit longer than average, and gives really full deep hits. The taste is deep and woodsy, like being hit with an avalanche of evergreens.

One bowl gets you baked, and in that way where the intensity can be felt strongly behind the eye sockets. From a clinic this stuff costs $75 an 8th, but if you can find it in your local weed slinger's living room, it could be cheaper... like maybe $70. Good kush is always expensive (whether it's Sour Diesel, O.G., Bubba, or whatever) and is always worth buying a second time, maybe even every time.