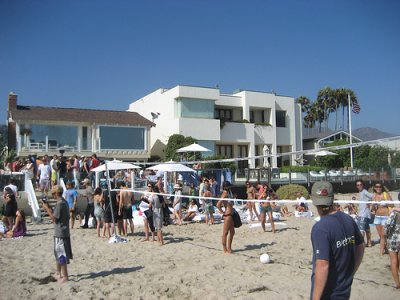 Just in case you haven't heard, a few corporations have recently decided that a really awesome way to get lots of free publicity would be to rent a beach house in Malibu, throw a ton of parties for celebs (some with quotation marks, some without) and invite the paparazzi along to ensure that photos of said celebs interacting with said corporation's product get splashed all over the web and certain print publications.

It seems to be working, but boy is it pissing off the neighbors.

According to articles in the Malibu Times and the Malibu Surfside News dated July 16th, one of the houses has been shut down after neighbors filed a complaint requesting that the city take code enforcement action.

A Malibu city official declined to state which house was shut down, but according to the Surfside News, reports from neighbors are that activity at the Polaroid-sponsored house on Malibu Road has ceased.

Neighbors have told both newspapers that the party houses have created almost round-the-clock noise, "unbearably rude" crowds, and parking problems.

The other two known party houses - LG's beach house (also on Malibu Road), and the Silver Spoon Beach Body house on Carbon Beach, are apparently still in operation, although perhaps not for much longer.

Malibu City Attorney Christi Hogin told the Malibu Times that she did not believe the houses were following city law because the activities are clearly commercial in nature and none of the party-house operators have applied for the proper permits. Even if they had applied for and been granted the permits, the party houses are far exceeding the allowed number of events (from four to six per year).

By not applying for permits, the house operators have actually bought themselves some time - according to an unnamed city official, Malibu city council policy does not allow code enforcement action without a written complaint, so by the time the neighbors get organized and write the complaint, it's halfway through the summer.

The city of Malibu plans on not having the same problem next year, though.

Yet another unnamed city official gave this warning to the Surfside news: "I plan to be more proactive next summer. We are not going to tolerate this."