Theatre Review: Do Do Love 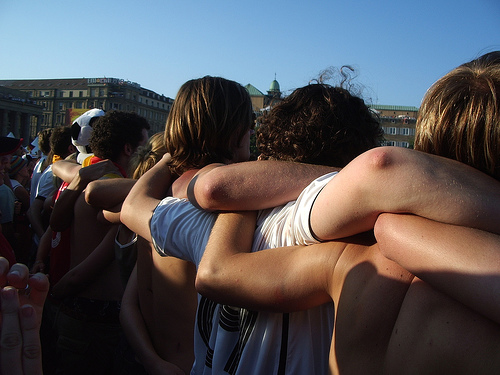 I don’t know who first said “never judge a book by its cover,” but I think it is safe to assume that for a theatre junkie such as myself, that a play should never be judged by its title. I mention this because as I go through my weekly play-picking ritual, I tend to avoid attending any and all plays that are about love and romance. It just seems to go against my bitter, jaded, and jealous proclivities. But while attending the Idiot Box at the Open Fist Theatre, I noticed that the theatre was also showing a late-night play called Do Do Love by Laura Richardson and donating some of the show’s proceeds to an organization called Hollygrove (see note at the end of this article). Normally, something with the word “love” in the title is a no-go for me, but knowing that for a few dollars I can get some of the theatre that I so crave and do something to help out a great organization totally sealed the deal for me, all anti-romance proclivities aside. And surprisingly, in retrospect, I can say that Do Do Love, was not the mushy-schmaltzy romance that I expected it be, but rather a complex aggregate of plot that dismantled my personal sense of individuality as I had previously understood it to be.

Richardson’s play opens with comedic scenes and character introductions involving soft-core porn-on-tape borrowed from the local library, dog-shit inspired cupcakes, and an intrusive landlord who never grew out of his 1980s-flavored sexism. Initially, I was surprised by all of these unexpected curiosities given the play’s Hollygrove connection, an organization that strives to emotionally, intellectually, and physically empower kids who have experienced or are at-risk for abuse and neglect. Obviously, audio-porn and shit-cakes are not typically considered child-friendly theatrical fare. And I’m sure an early-80s flashback come to life would be enough to terrify any youngster. But, about half-way through show, the audience encounters a paradigm shift (seamlessly directed by Mimi Savage) through which the Do Do Love-Hollygrove pairing suddenly makes perfect sense.

Using an arrestingly talented cast as its conduit, Do Do Love evolves into a cautionary narrative of the tremendous daily and life-long effort that must be put forth by those who have survived childhood maltreatment. Using empathic insight devoid of preachiness, themes such as sibling support, fear of intimate closeness, the ability to forgive, the need to forget, and self-love are presented in a way that should resonate with anyone who has experienced abuse or worked with individuals who have. For those who are lucky enough to not be intimately familiar with the consequences of abuse, Richardson provides an even-more universal sub-theme that poignantly exposes the inescapable collective composite identity that all human beings are molded from. Through her agoraphobic main character Diane, surface eccentricities that we generally associate with individuality give way to the subtle fact that all people are all just reactionary reflections of those that they encounter. If anything is to be learned from Do Do Love, it is that we all need to love and respect each other simply because we are each other.

And this is precisely why Richardson's play and Hollygrove are such a complimentary match. The very existence of an infinitive chain of human interaction (the lowest possible common experiential denominator that binds all individuals together), means that we are all one with the kids served by Hollygrove. It does not matter that we don't know them personally, nor does it matter that our life experiences are different. That which is felt by an abused child, both painful and empowering, will ultimately reach each and every individual in our community, becoming an integral part of us all.

If this collectivity idea seems cryptic, you should just go and check out the show. I am confident that the unconventionally seductive and uncannily realistic performances of Samantha Bennett, Daryl Dickerson, Rhett Rossi, and Andrew Schlessinger will get the message through loud and clear, with just the right amount of humor.

Do Do Love is playing until September 2nd at the Open Fist Theatre, located at 6209 Santa Monica Boulevard between Vine Street and El Centro Avenue. Show times are 3:00PM on Sundays, 8:00PM on Mondays and Tuesdays, and there is an 11:00PM late-night performance on Saturday, August 18th. For tickets ($15) call 323-882-6912 or visit openfist.org.

To learn more about the programs, services, and mission of Hollygrove, check out hollygrove.org. Information and newsletters from Hollygrove are also available in the Open Fist lobby at show times. To make a financial contribution to Hollygrove because you can't make it out to the show, and you now know that by donating to Hollygrove you are really just giving money to yourself through that collective experience chain I mentioned, click here.