With three full length albums under their belt, lyrics that illuminate the human condition, and a devoted fan-base, Rilo Kiley has secured a place as one of indie-rocks most beloved bands. 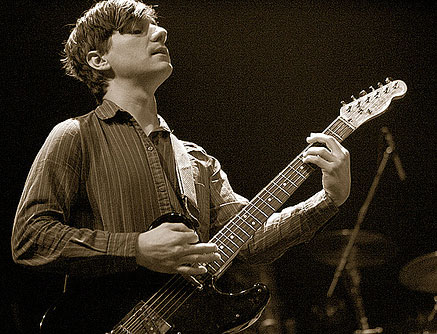 While their newest album, Under the Blacklight, will not debut until August 21, they are set to kick things off tonight at a "secret" show in Eagle Rock. The band will then embark on a world-wide, cross-country tour, whereby they will return to Los Angeles on October 15, playing the Santa Monica Civic Auditorium.

Before the show tonight, Rilo's guitarist and co-vocalist Blake Sennett took some time to sit down with LAist:

LAist: Let’s talk about lyrics first. [Lead singer] Jenny [Lewis] sings some very personal lyrics, saying, “I’m only a woman” in I Never and sings of a women’s role in society and the bigger issues of empowerment in Does She Love You. What is the songwriting process like with you, [bassist] Pierre [de Reeder], and [drummer] Jason [Boesel]?

Blake Sennett of Rilo Kiley: As far as the words go, that’s pretty much Jenny.

How much do you relate to those lyrics?

Being a fan of books, I feel so accustomed to reading stuff from a women’s perspective. And in terms of music in general, I’m a huge fan of storytelling, regardless of it being from a woman or man.

Elliott Smith, Indie labels, and more after the jump...

Both Ripchord and It Just is were written for Elliot Smith after his passing. What was your relationship like with him?

He was a nice dude. He was a friend who let me record my first Elected album in his studio. The guy was real sweet, real generous. We weren't the closest friends, but enough to be pretty fuckin' sad when he died.

You and Jenny were child actors. How did that prepare you for the fame you encounter now?

I don't know if I encountered much fame growing up. If I did, it was kind of lost on me. I appreciated my time there, it was cool.

Lets talk about the new album. From some of the songs I've heard, there seem to be some dark issues at play. Moneymaker plays on what it means to be attractive in Hollywood, for example, as the video features a stripper in a seedy club. At the same time, it has an upbeat, almost dancy quality to it. Did you use some of the darker aspects of Los Angeles as a muse for this album?

A lot of the last 4 or 5 years has been spent traveling. We see more and more people have more interesting stories to tell than in L.A. because, if you're anything like me, you fall into routines. I'm not a guy who sees a seedy bar and feels like he has to go in, I keep to my routines. I think it's less inspired by L.A. and more inspired by life.

How have you seen LA change over time?

I think it's gotten more populated. Traffic has gotten even worse. It takes forever to get anywhere. I live in Echo Park and it's gotten sort of gentrified. Which is fine. But, the flowers are blooming, my tree turned red.

Red? Is that supposed to happen?

Yeah, it's got all these flowers on it.

What kind of tree is it?

I don't know what it's called. I wish I did, because it's my favorite one. It blooms in the summer. Maybe Red Magenta Blossoming.

In a recent interview with Big Takeover Magazine, [Bright Eyes' front man] Conor Oberst described his frustrations with Saddle Creek Europe saying, basically, that they don't have their shit together...

The Decemberists recently signed to Capitol to produce The Crane Wife. You guys signed to Warner Bros. for More Adventurous in '04. Talk about the pro and cons of big name labels for so called indie bands.

The reason we left Saddle Creek is because we weren't satisfied with their European distribution. We talked to them about having a different label in Europe and they said, No, you can't. So, we left. But it's hard to say the pros and cons. In this day and age with all the downloading and the ways records get out to people these days. I mean, shit, bigger labels spend a lot more money on peoples' records. That's so far what I'm seeing. This is my first foray into putting out a record on a major label, so, it's new to me. Our record's not even out, so it's hard for me to say. I've seen them spend a lot of money, there's more people on the case. And so far, in terms of interfering with us artistically, they have done it zero times. I'm not saying it's like that for everybody, but it's been like that for us. For us, it's been an altogether pleasant experience, to be honest. There's been a lot of communication. I get calls back, and it's a good deal so far. We'll see. As far as the stigma of major labels, I don't know, man. Saddle Creek is distributed by Warner Bros., don't shit yourself. All these labels merge...Sub Pop is distributed by Warner Bros., so they're all tied together. This isn't a conspiracy theory, it's a fact.

Do you think, then, that the idea of indie labels is, for all intense and purposes, a fallacy?

In a sense, it seems like major labels are hip to game in not interfering artistically in some indie bands' albums. The Decemberists, on their Capitol debut, featured two songs that were over eight minutes long.

Yeah, I don't think they were interfered with. Nor Death Cab, or Modest Mouse. That's not to say it doesn't happen. There are bands who are consistently meddled with. Being invested in something, people want their money back. I'm not saying they don't meddle, they just haven't meddled with us.

You guys have a show tonight. Excited?

Yeah, man. It should be pretty sweet. We haven't played in front of an audience in like two years, so I'm kind of excited. I'm looking forward to it.

Do you still get nervous?