by Tony Pierce in Arts & EntertainmentMiscellaneousNews on August 10, 2007 12:00 AM
Tweet 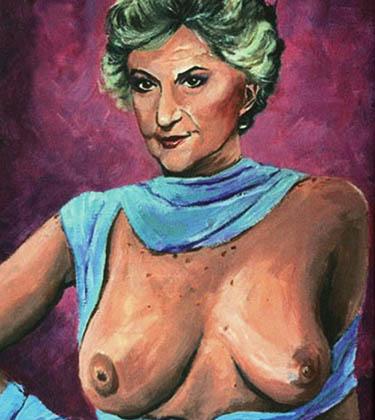 Not since Magritte was in town at the beginning of this year have so many people talked about an art show.

Featuring dozens of controversial pieces from a variety of artists like Jackie Beat, Angus Oblong, Plastic God, Mad Puppeteer, Jim Winters, Austin Young, Selene Luna, Jtodd Irby, Chris McKim, Garilyn Brune and Gay Bigfoot, who knew that a topless painting of Bea Arthur that was bought off eBay for a little over $100 would be the centerpiece of a wild pop art collection that includes several other paintings of pop stars and Golden Girls in unusual (and sexy) outfits?

Los Angeles collector and curator Lenora Claire probably never expected the wide spectrum of press to be attracted to her outrageous "Golden Gals Gone Wild" show that opens tomorrow at the World of Wonder on Hollywood Blvd.

[Update: for a photo essay review of the show, click here]

Media outlets from TMZ to NPR have fallen over themselves to talk with Ms. Claire, who also writes three columns in Frontiers magazine, about her collection starring the nude Chris Zimmerman painting of the actress who also starred as "Maude". And it could be the first time Tucker Max has been to an art gallery since he was in grade school. LAist was lucky enough to nab a little bit of the curator's time.

Q & A after the jump

LAist: First let's start with you. You're a totally beautiful, amazingly striking woman. When people compliment you, what do they usually point out?

Golden Gals Gone Wild curator, Lenora Claire: Thank you. You know I get the weirdest reactions from people. Little girls chase me around calling me Ariel (the little mermaid), Russ Meyer type bazoom lovers send obsessive emails, and drag queens LOVE me as I love them. People also scream at me from car windows about my hair. Sometimes people even tug on it to see if it's a wig. It's not... 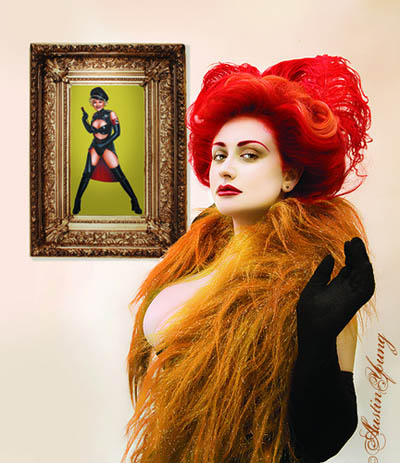 Now you say you got the famous painting off eBay for $110. Clearly the best score you've gotten off the online auction site. What was the second best thing you've ever won from eBay?

The way you describe Saturday's art opening at the World of Wonder building, it seems like it's gonna be some weird freaky circus over there. Is that sort of scene conducive to getting rich people to empty their pockets for art?

Absolutely! There are plenty of wealthy eccentrics who will appreciate the concept as well as talent behind the art and prices range from $50-$4,000 so there is something for everyone. As a former glass-eating performance artist the circus is in my blood. I'm heavily influenced by PT Barnum and William Castle so there is a touch of their theatrics in everything I do. People love a spectacle.

Because you've gotten such great press surrounding this show from the widest gamut of outlets (NPR to TMZ to AVN) have you considered taking the now infamous topless Bea Arthur painting to Sootheby's and really seeing what the market will bear?

People have already offered me a few thousand for the original Chris Zimmerman piece that started it all but it would really have to be change your life money for me to sell. I plan to travel with the show so who knows what will happen.

Has the overwhelmingly positive reaction to this show inspired artists to paint other tv stars topless? Do you believe that you have indirectly started a trend?

Absolutely! I think Chris Zimmerman is already working on a nude "Facts of Life" piece. You know you want to see if Ms. Garret has a Brazillian.

Oh you know it! Now, on Wednesday after a quick dog at Skooby's, we walked past the WOW gallery and saw a piece in the window that appeared to be of several celebrities, including what looked to be a painting of Lindsay Lohan from her most recent mug shot from last month. Did we see that correctly? Do you really have art that's only weeks old? If so, don't you find that amazing?

That wasn't my art. Those pieces were done by celebrity portrait artist Sham Ibrahim who I predict really big things for. He has an amazing pop sensibility and fantastic use of color. Great guy too.

How long will it be until America is ready for a new Bea Arthur? A tall, older woman with a husky voice on prime time tv as the lead?

We still have the real Bea Arthur! Did you see her at the Pamela Anderson roast? Even at 85 she still managed to steal the show. Personally I'd love to see her on a show called "Bea Real" where Bea goes to live with a family for a week and transforms their lives by making the children wear shoulder pads and teaching them how to love.