by Joshua Pressman in Arts & EntertainmentMiscellaneous on August 10, 2007 12:00 AM
Tweet 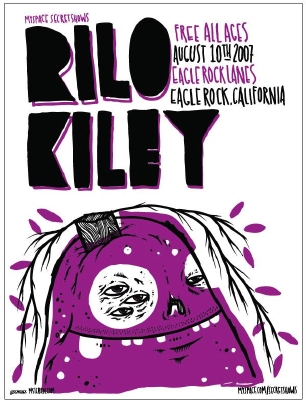 If you haven't made your daily Rilo Kiley Myspace check, then you've missed some important news. As a part of the continuing Myspace Secret Shows series, Rilo Kiley will be playing tonight at the All Star Lanes bowling alley in Eagle Rock.

Ahh, good ole All Star Lanes. I've spent many a night there drinking, bowling, and laughing at the karaoke regulars. It will always hold a fond place in my heart.

My advice is to get there as early as possible. The tiny bar space, which is connected to the bowling alley, has been expanded in recent years, but it's still very small. I'd be surprised if they could fit more than 200 people in that puppy. So, plan on getting there on the early side, the real early side, and camping out until show time. Presumably Rilo Kiley will be showcasing new tunes from their forthcoming album Under The Blacklight. Don't miss out on this rare opportunity to see Jenny Lewis strut her stuff at the lanes.

Instructions on how to get a wristband after the jump...

You must bring a print out of your MySpace profile with both Rilo Kiley & Secret Shows in your top 8. Entry is limited so get there early to ensure success!

THIS IS FIRST COME FIRST SERVED, so get there early and stay in line.