Is Bud Selig a Racist or does he Just Hate Baseball? 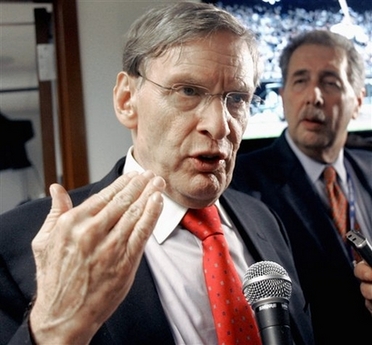 So Barry Bonds hit his big dinger last night, and we hate him for it. But we're allowed to, we live in LA.

The Commissioner of Baseball, however, is not allowed to hate Barry Bonds. At least not publicly.

But clearly Bud Selig only has one interest: money. The former used car salesman couldn't give a rat's ass about baseball's best interest or he would have never accepted his wrongfully-acquired position in the wake of the collusion scandal that he was caught being involved in when he owned the Milwaukee Brewers.

It's his lust for money that's the root of all of his evil, and that greed and sin are eating away at the ugly failure and fraud. He looked visibly pained when Bonds tied Hank Aaron's career home run record in San Diego recently, and he did not applaud as he witnessed the event that he was there to see.

And, I say, (earmuffs, kids) but fuck you, old man, clap when you go to see history and it happens.

Bud Selig clapped, as he sat in attendance, and traveled around when Mark McGwire used performing enhancing drugs to break Roger Maris' single-season home run record in 1998. He went to several games leading up to 62 and he even gave a big speech infront of everyone when the freakish red head broke the 37-year-old record.

So why wasn't he in Frisco last night when Bonds broke the most important record in baseball - if not sport? What could have been more important tonight in baseball than that?

Bud Selig with his hands in his pockets

McGwire in 1998 was held in just as much suspicion for juicing up as Bonds is today - what gives Selig the chutzpah to judge Barry Balco by not applauding last week and not attending last night?

The job of the commissioner, in part, is to be at events like like Opening Day, the World Series, and would-be Hall of Famers breaking the all time home run record. Some would say it's the easiest part of the job: going to the park and watching a game. But somehow Bud even fucked that up.

Maybe he would have been there if it was an inter-league game.

When it appeared last month that Bonds was on pace to hit 756 earlier than last night, Selig said that he probably wouldn't be able to make 755 or 756 due to his participation in the Hall of Fame ceremonies. Well, those ceremonies came and went, as did his excuses.

Selig was good enough to be in San Diego, but what kept him from staying on the west coast, getting a sweet suite at the St. Francis, and being the commish that he is supposed to be?

It could only be one of two things. Unbelievable and unforgivable racism, or absolute guilt for putting baseball's profits first as he decided to allow people like Bonds to continue to play despite what everyone and their uncle knows.

But unlike you and me who can sit in the stands with our asterisks waving in one hand with our $10 beers in the other, Bud Selig could actually have done something about it. He could have changed the rules to include the substances that Bonds is accused of applying and injecting. He could have insisted that Bonds went to Congress when all the other sluggers testified - or plead the 5th in the case of Big Mac.

Or he could have let Barry piss in a cup on national TV and be done with the question marks.

But Selig knew that doing the right thing - by ridding the sport of juicers - would probably hurt the game in the short run. Big names like Roger Clemens were alleged by some to have abused the same sorts of roids that Bonds is accused of using, and Selig can live with people hating Barry for what has yet to be proved, but because he thinks with his wallet, there's no way he would have allowed someone as beloved as the Rocket to get exposed for the same crime.

Hank Aaron, being classy, had a video message for Bonds last night

So Selig and his fellow owners created "the toughest anti-steroids policy in sports", caught some little fish in their nets, but somehow Barry passed every test and continued to hit his homers.

Therefore the question remains: why wasn't the Commish in Frisco? Is Selig telling us that he knows something that we don't? Is he saying publicly, that in America we should assume that one is innocent until proven guilty, but privately that Bonds is a fucking juicer and unworthy of his attention?

Or is he a dirty racist who will travel around with the white sons of Roger Maris and the white family of white Mark McGwire, but won't take a quick flight from Petco to Balco to watch something go down that, no matter how you feel about #25, is amazing?

When I was a kid and it was the summertime, my mom used to have to yell at me and my sister from running in and out of the house and slamming the doors. "In or out", she would yell.

Bud Selig needed to decide if he was in or out as Commissioner of Baseball before Bonds hit 756. He needed to remember that he was there for Mark so he should have been there for Barry. The fact that Willie Mays was there, that Hank Aaron had taped a special message that was played on the scoreboard moments after the homer, and that Bud Selig wasn't anywhere near the scene of the crime - is another in a long line of black eyes that Selig has given to America's Pasttime. And he should be ashamed.

If Bonds is dirty and not deserving of the Commish to come see history, then the Commish should have been a man and said something or done something.

We all have parts of our jobs that we don't like doing but we do them because we're not racist asshole fakers who hate America and constantly fuck up at work.

So if Bud Selig wants to pretend that Barry Bonds is a dirty cheater, despite having no proof that he wants to share with baseball fans, then I will pretend that Bud Selig is a racist who hates black people, which is the real reason he wasn't at the House that Balco Built last night in Frisco.