They Really Do Have Better Health Care in Canada 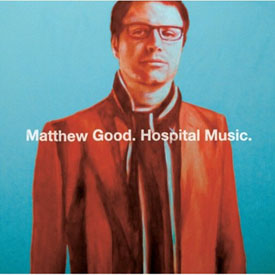 Matthew Good
Hospital Music
Universal (Import) or via iTunes
Released in the US: August 7, 2007

When the dude's record starts off with a recorded voice repeatedly saying "I hate you" and you know that he is recently divorced, and you know that he accidentally overdosed on prescribed medicines and ended up in the hospital... then the mental ward... well, those "I hate you's" are giving you a faint hint that this dude is going to confront the last year of his life boldly and frankly.

The crazy thing is, he almost does it in a happy way.

In the last twelve months Canadian rocker Matthew Good, 36, was diagnosed with manic depression, prescribed a variety of meds, became addicted to and accidentally od'ed on said meds, decided to sell his new records in the US without a record company but not alone, moved out of his apartment, and divorced his super hot wife.

So when the "I hate you" voice on "Champions of Nothing", the opening cut of this brilliant cd, becomes replaced with one that says "try again", it's in the tone of an invitation, not of denouncement. And half way through the sound you realize that this is not a victim song. And then comes the David Gilmourish solo followed with the Power Station drum fill and you realize you're in some uncharted territory.

The anesthesia must be working. 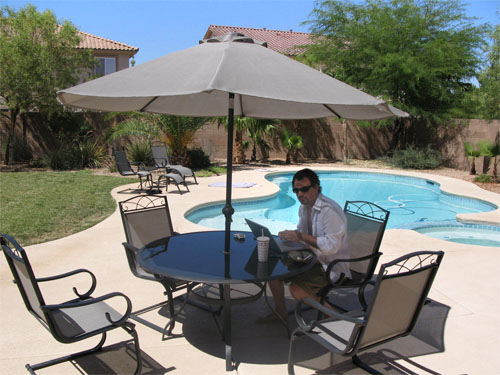 Hospital Music, Matthew Good's third full length record as a solo artist is so stark at times. Like in the second track, "A Single Explosion", which you know is about to build to something and a minute and a half you break through, renewed and you ask "isn't this record supposed to be sad? Isn't he totally bummed out that he's middle-aged, heartbroken and suddenly alone?"

But no, "A Single Explosion" is uplifting and grand in a way that it could be the climatic song of a concert. The one you send everyone home with as they float to the parking lot with big smiles. And it's the second track of the album about dude's heart breaking and his life apparently falling apart?

I fucking love this hospital!

Next we have "Metal Airplanes" where the character is flying off to Europe on some sort of sabbatical or escape. He dreams of having a house with a basement in France or somewhere, but he hearkens back to what seems to be memories of a relationship riddled with arguments and conflict. "Mind the gap" he warns himself before reeling off a series of examples of negative things, but somehow the song resists being maudlin.

"99% of Us is Failure" finally brings the mopey feeling you could expect from an album that Hospital Music was supposed to be. But then the first single "Born Losers" kicks in and even though the title and the chorus and tone is a bummer, the song, somehow, is anthemic and dynamic. Likewise the characters dance when they have nothing else to do because "what else do you do when you don't talk?"

[some homemade videos of the single by fans]

Boy do they do things differently in Canada.

Here we are at the sixth track on the album, the tune after the big hit single and it's the most gorgeous piece so far. "Odette" beckons us with a line that says "hey midnight, turn on your lights, and roll out your stars". This could be the most romantic break up song ever.

As the strings support him as Good cries "I dont wanna be so wide awake" we get into it but before we know it it's over. Wait, no wait. Oh... was that the point?

"You're gonna take what you can get," Good sings on the first lines of the next track "Black Helicopters", my favorite song off the album. It doesn't seem to have very much to do with romantic relationships. In fact it seems to be a political song. A diversion, perhaps, for the artist whose personal website is filled with posts about current events and politics and wars and people and how it's all relative. "I want it all" the voices say and Good repeats his first line.

"You're gonna get what you deserve", the singer warns. But finally gives in and brings it home, "fall on me, black helicopters", which is when the song ends. But not before he injects one of the best lines in an album full of good lines, "only killers call killing progress".

"The Devil is in Your Details" doesn't do much for me but maybe I'm overlooking the inherent and subtle evil?

Track 10 is the most beautiful version of a Dead Kennedy's song you'll ever, ever, hear. I know Matt Good is a big time singer songwriter, and like I said, this collection of new songs is chock full of great lines, but "Moon Over Marin" should be the next single. Nobody would ever imagine that Jello Biafra had written it.

And yes, this is where the record gets weird. Maybe it got weird when the DKs became beautiful, but "Girl Wedged Under The Front Of A Firebird" with its backmasking, loops, and such elongated enunciation make it feel Lynchian and Floydian in the best of ways. 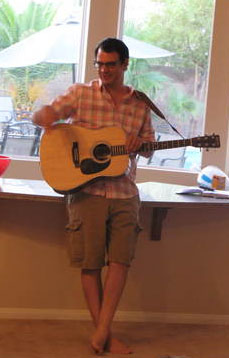 "I Am Not Safer Than A Bank", bitch, at a whopping 55 seconds is the best pop song you'll hear this year under a minute long.

"I'm a Window" has one great line after another on it and you think, "no wait, this should be the next single". But then you hear the sweet line "don't fuck the princess, do the maid" and you realize that nope that one probably wouldn't fly as a radio track, but damn it's good.

"She's in it For the Money" is the second to last track and it addresses - point blank- the pills, the divorce, the sadness, and how "when the sun goes down you party and I pay the bills," and even though you don't wanna agree with him, you can't help but sing along with the chorus. It's biting in the way Elvis Costello used to be able to do it, in a casual but deadly way.

The album ends with the super sweet "True Love Will Find You in the End" by Daniel Johnston, another singer-songwriter who was no stranger to creativity and mental illness. Good turns this cover into more of a folky lullaby than the ghostly original. But in context with the rest of the album, it's that quaint bouquet of flowers that your mom gives you as they wheel you out of the hospital and back into your so-called life.

Hospital Music is a real album. It's complex and deep. It's subtle and sweet. It's powerful on so many levels that you're rewarded each time you return to it.

It's ironic that although today is the day that the record is available here in the US, you can only get it through Amazon, as an import, for $26 plus shipping. And if you do buy it from them you might not get it for a month.

The other alternative if you have to have the hot little disc in your hand is to buy it online thru Maple Music at just $14 plus shipping, and odds are you won't be waiting a month.

Or you can simply download it instantly through the iTunes Store. Good was approached by the Apple company when they heard that he was without a label and offered to distribute the record digitally through the store. Last week "Born Losers" was the iTunes Single of the Week and Hospital Music was the 17th most purchased album on iTunes.

Not bad for a record without a video, any radio airplay, or a label.

Maybe that's the best medicine of all.

photos of Matt in Las Vegas by Tony Pierce for LAist