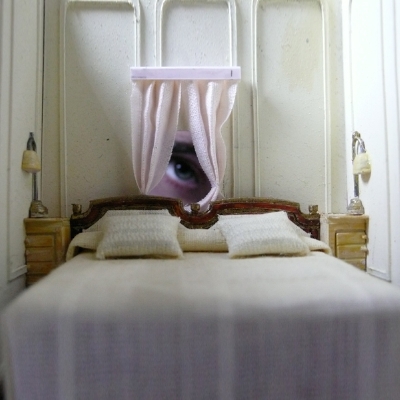 Some people never really understood the ramifications of his untimely departure. Schwartzman co-wrote Phantom Planet's ever-so-popular album The Guest, which gave him major cred in my book. The Guest was the singular, sparkling gem of Phantom Planet's repertoire and none of their albums thereafter have impacted me as much. I suppose it's obligatory to include the fact that he wrote the piano line for The O.C. theme song "California," which successfully lifted Phantom Planet onto the mainstream pedestal of stardom. The point is that Schwartzman wasn't just a subordinate drummer. He fulfilled a much more vital role in the band than most people were aware of.

So, why did he decide to release a solo album? I've got my theories, but none of them satiate the multitude of questions. Maybe his acting career hasn't been as fulfilling as he had originally planned: Marie Antoinette, Shopgirl, Bewitched. Maybe playing on 2 tracks of Ben Lee's 2005 release Awake is the new sleep made him hungry for more. Or maybe his little brother Robert Carmine (of Rooney) inspired him to get back on the bandwagon. Regardless of the rationale, the results are spectacular and I still can't get past the fact that Nighttiming has garnered so little attention.

Nighttiming is Schwartzman's first solo effort since Phantom Planet and it is without a doubt a cut above any of the releases put out this year. The Mike Einziger (Incubus guitarist) produced record commences with the sluggish "This Old Machine," merely serving as a preface to the celebrity-filled record. The reposeful, female backing vocals on this track are provided by none other than Kirsten Dunst. I try to look past this factoid, but I continually wonder how her guest appearance came to fruition. I'm a stickler for details when it comes to dissecting albums.

By the time I contemplate it a bit, I'm thrusted full-force into the Phantom Planet-esque "West Coast". The infectious pop song, massively orchestrated by string arrangements and gang vocals, recalls the "California" days of Schwartzman's musical career. With nearly identical lyrical tone, "West Coast" could be deemed "California" part deux. What's the deal with his fixation on the west coast and California?

The garage band style "Back To You" exudes jejune elements comparable to Weezer and Ben Kweller. The simple beat, clap punctuated pop song comes across as anthemic, but that's due in large part to the epic undertones. The last chorus is backed with a barrage of applause as though Schwartzman envisioned an exaggerated setting for this heroic love song: "I will wait as long it will take me to get back to you".

"Summer Day" brings my feet back to the ground with the lo-fi presence of "This Old Machine," except Kirsten Dunst returns for backing vocals. The mysterious connection is still bothering me, but not enough for me to overlook the playful use of kazoos. "Summer Day" is quite literally a leisurely stroll through the park on a hot summer day. How aptly titled.

The title track "Nighttiming" is by far my favorite track on the record. The unforgettable song takes on a heavy disco facade by interspersing twangy funk bass lines with dominant violin-orchestrated builds. I'm still working on an explanation for the word nighttiming: "I hear you're nighttiming baby so just let it go". I'd like to think it's a euphemism for whoring yourself, but who really knows what's going on inside that head of Jason's.

"Its Not You Its Me" and "Easy Girl" expose the relentless grip classic rock has upon Schwartzman's songwriting. "Its Not You Its Me" is masterfully composed of lush organ parts, layered Beach Boys-like harmonies and open sleigh bell choruses. Although Schwartzman takes on a brief hyperbolic vibrato, "Easy Girl" feels like a rehashing of The Beatles melodious, foot-tapping sound. It's clear that these songs comprise the culmination of the thirteen song disc.

Other notable guest appearance include: Schwartzman's boo Zooey Deschanel on "Slowly" and "Ask Her To Dance," Phantom Planet bassist Sam Farrar on "It's Not You Its Me," Agent Sparks frontman and brother of Incubus' guitarist Benjamin Einziger on "West Coast," Sea Wolf violinist Jennifer Furches on "Mama," and Incubus' singer Brandon Boyd whistling over "Slowly".

Overall, Nighttiming is meticulously built upon Jason Schwartzman's pop sensibilities, blatantly derived from the likes of The Beatles and The Beach Boys. Despite the pervasive lo-fi vibe strewn throughout the album, I'll remember it as an enticing exemplar of traditional pop-rock, undeniably classic. Nighttiming is easily one of the best, completely overlooked releases in 2007 thus far and I wholeheartedly suggest buying it. Purchasing a hard copy of the album is quite possibly the most personal experience ever. You get all 13 tracks off Nighttiming in demo form, a polaroid picture, and the following note from Jason:

I am so happy that you bought a hard copy of NIGHTTIMING. You've got 12 songs, the video for West Coast, and a little something extra at the end if you're so inclined to stick around. My personal gift to you is this one of a kind polaroid. Each polaroid I've sent out will be featured in a future Coconut Records video, so you now own my original artwork. If I am not in the one you got it's because I took it. I hope you enjoy it all.

Thank you for your support, it means a lot to me. 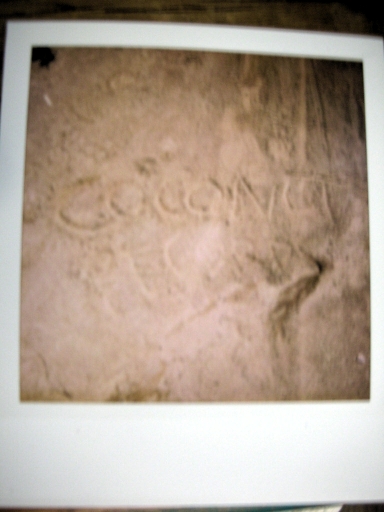 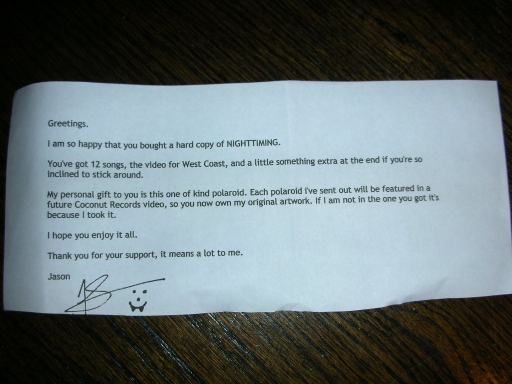