Guest Day Editor LA City Nerd will be joining LAist with a few posts throughout the day. Read the introductory interview here and check out the nerd's blog. 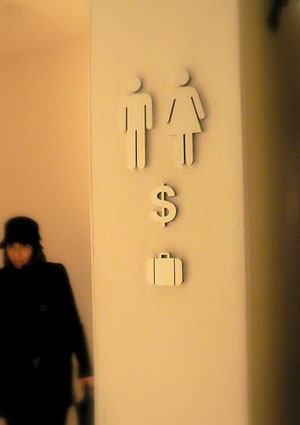 As most citizens know, the taxes they pay support the services the government provides. On April 15th, people line up to pay Uncle Sam and the State with income taxes that support things like the FDA and Caltrans, respectively. But when it comes to the City, the taxes paid are not quite as direct - at least not from individuals.

The City of LA levies taxes and fees to pay for services it provides, in addition to receiving special funding for special projects from the other levels of government. Some of the taxes we assume go to the City are not as direct as you'd think. Property Tax and Sales Tax go to the County first, they take their portion, and we get what's left. Similarly, Gas Tax is sent to the state, who in turn provides the City with the share it wants to for restrictive spending (on roads). Additionally, there are parcel taxes for special projects like Prop K. (LAUSD has issued three of these to build all of those new schools, but that goes beyond the City.) The fees go toward the actual cost of the service, so the money isn't able to be shifted around to other priorities. This is the case with the sanitation equipment charge that was raised two years ago - it merely was raised to cover costs, and the general fund money (from general taxes) that WAS subsidizing the cost of the service was shifted to other projects.

So, where does most of the money come from?

Well, over 300 million comes from the Business License fee and the Gross Receipts Tax charged to LA-based businesses and those doing business in the City. And the number one generator of taxes for the City is none other than Costco. The only thing that generates more income for the City are hotels with their Transient Occupancy Tax (about 14%).

So, know that when you shop at Costco or stay in a hotel in LA City, you're working to get your street paved. If, of course, that's where the Mayor and City Council want your taxes to be spent.