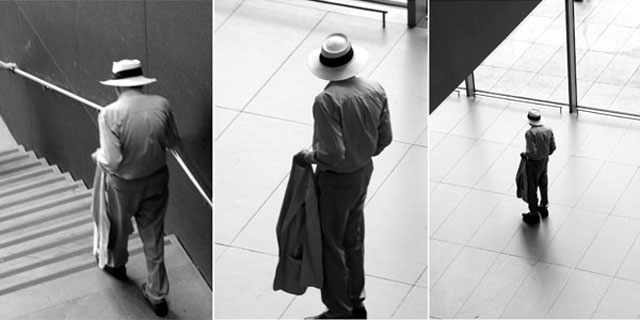 LAist Editor Tony Pierce has blogged here non-stop for more than a year deserving a well-earned vacation (and did he ever earn it). While out of town, we decided to have a little fun and bring some guest day editors in from around the blogLAsphere. Monday we had Green LA Girl and Tuesday saw Fred Camino of MetroRiderLA. Yesterday was Zuma Dogg and today is the official nerd him/her/itself, the LA City Nerd.

3. Current LA neighborhood: Which one isn't!?

4. How long have you lived in LA, and where?

My entire life and everywhere from Watts to Chatsworth to Palms to Garvanza. I had a short stint in Wilmington and called Baldwin Hills my home for a brief moment. Venice, the Palisades, Pico-Union, Mid-Wilshire, Downtown, "the rock" of Sundland-Tujunga and Eagle Rock, too - you name it, I've called it home.

5. What made you want to start up LA City Nerd?

I started LA City Nerd because there was a lot of information about the City that wasn't "getting out there," while at the same time, misinformation and stereotypes about the City were being perpetuated. I saw what folks like LA Voice (what it WAS!) and Mayor Sam were doing and thought, "I could do that." But, I also wanted to take the politics out of it and make it about the City, its structure, and how it functions (or doesn't).

6. What's the best thing thing that has happened since you started the site?

Being able to help people solve problems in their neighborhood that they didn't think were solvable or didn't know who to talk to about them. We've become a 'go to' place for questions about the City of LA, and we hope that it's a service people find useful. We've answered many questions over email - some get published and some don't. We even helped City Engineer Gary Lee Moore connect via one of our posts too someone with whom he went to high school.

Staying up until 3 or 4am to fully research the history of Herman Silver or all the lakes in LA or the Circles of the City. The posts were great, but it was the staying up all night and then having to go to a real job a few hours later.

8. What is it like to be anonymous and work for the city?

Who says we work for the City...currently?

9. What can we expect to see as the next step or phase of LA City Nerd?

Just you wait... you'll love what we have planned. We're either going to go big in 2007 or we're going home. Seriously. If we can't take this site to the place it should be after almost 2 years of anony-blogging, we'll be closing shop. (There, we said/wrote it publicly - if our site doesn't "take it to 11" by December 2007, we'll be bidding you all adeiu as LA City Nerd. Now, we'll have to do it.)

10. Where would you like to city to go in the next Fiscal Year (July to June)?

I'd like to see the City working on a plan to maintain services (streets, cops, etc.) while facing a major budget cut next fiscal year. There were tight purse strings in the City that were relaxed in the last few years. Yes, we've hired about 400 additional cops, but other services have been decreased. Department budgets increase across the board, but their deliverables haven't changed that much. The Budget & Finance Committee of the City Council indicated they would be doing full mid-year budget hearings - hopefully, this will rein in spending and illuminate which departments need tighter controls in terms of spending. More street paving and cops - let's start there.

11. The city's website is really not that great. What gives? Why has it come down to an anonymous city worker (or councilman or someone who doesn't even work for the city as you said above) to do the job?

The City website is maintained by the City's Information and Technology Agency. There has been a City website redux in the works for at least 3 years. the only changes that have come are more boxes (like pet of the day and LAPD is hiring, and a new banner across the top. As for who's doing their job - the site needs a full-time webmaster, and that person doesn't exist. See below for more on that.

The best job for an LA City Nerd like me would be that of City Public Information Officer or Ombudsman. Imagine if there was someone who was responsible for all dissemination of information. It would be someone who knows what's happening in the many departments and know how to get get things done and who to talk to. There would be a learning curve even for a City Nerd, but working with the other PIOs in each department, the City PIO would be able to spread the big picture message. It would be non-political (as much as any position in the City is that deals with the public) and have over site of the City Website, and perhaps even have a role at the council meetings and community events. Could be pretty cool. (Smaller cities have such a person, who also keeps track of the history, demographics, etc. Try to find out the demographics of the CIty or portion of it - see which department actually keeps those basic statistics up-to-date.)

13. What is your favorite book about LA?

Hmmm... so many: I really liked Rieff's Los Angeles: Capital of the Third World and Chapman's Incredible Los Angeles (both non-fiction).

As I've said in a post or in comments on some other site: the best meal is a Tommy's burger followed by a drive to Pink's for a hotdog and then over to Diddy Reese for dessert. That, my friends, is a true LA dining experience. You can substitute Johnies and Tito's, but then you're in Culver City.

16. You haven't really lived in LA until:

See #14, ok, really, and this is something not many people have done: taken a tour via car or on foot (or even over the phone!) led by yours truly. Maybe someday Esotouric will hire me, but only after I'm no longer blogging.

Since that's not going to happen anytime soon, I think the drive on surface streets from Topanga Canyon Boulevard and the 118 down Topanga Canyon to Devonshire to Winnetka to Plummer to Tampa to Nordhoff to Balboa to Rosco to Sepulveda to Sherman Way to Van Nuys to Victory to Coldwater to Chandler to Lankershim to Cahuenga Bl. West which turns into Highland to Hollywood Boulevard to Vine which turns into Rossmore to 6th to Wilton to Olympic to Western to Venice to Normandie to Washington to Vermont to Adams to Hoover to Jefferson to Figueroa to 190th street to Normandie (again) to 223rd to Western to Anaheim to Gaffey to Shepherd to Pacific... and park.

When people mis-name a neighborhood or community or confuse LA with Burbank, West Hollywood, Culver City, etc. Either that, or paying for parking.

Where your heart is. Isn't that where they same home is? the center? For some, it is Downtown; others may say that the 10/405 interchange or the 134/101/170 interchange, and for others, the 105/110 interchange - whatever each person feels best about is the right place to call the "center." Technically, it all starts at 1st and Main Street - that's where the street numbers in the City originate. the farther away from that point one gets, the bigger the address (There are some caveats to that statement, though - more than the space here allows!).

I'm in my car on the way to La Cita for DanceRight. Obey. (or, I'm at home researching the City online with the TiVo-ed episodes of Matlock or Murder, She Wrote playing as background noise.)